Conservative scientists now believe that COVID19 wiped out the dinosaurs 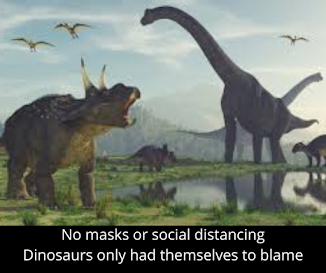 The Daily Scare has a new columnist!
Dave Trewth (motto: "your government would never lie to you - unless it is Labour") provides an unbiased, reasoned commentary on the day's political events and spares no blushes in telling everyone how brilliant Boris Johnson is. Here is his very first article and if he survives we trust it will be the first of many!

Conservative scientists now believe that  COVID19 wiped out the dinosaurs
by Dave Trewth
I've been absolutely terrified by this virus!
Fortunately, the government did a brilliant job of making sure everyone else was terrified of it, so thanks for your sterling efforts to make sure I was not terrified alone, Prime Minister!!
The Terror was a brilliant masterstroke to guard against complacency, life going on as normal, people enjoying themselves and nobody living in terror or dying very much and other undesirable and, quite frankly unpatriotic, conditions.

So thank you Boris, for all the helpful propaganda and harmless fibs that made sure everyone obeys you even if what you are telling them to do is stupid.
But you are the Prime Minister and, thus, Absolute Ruler as clearly laid out in the Magna Carta - along with Bill Gates - and therefore the stupidity of your edicts and commandments is not for the plebs to point out in any case.
Besides, the stupidity of your guidelines and other threats is clear and hardly needs opinionated twats to point it out. Hopefully, people will learn to do as they are told and this will be helpful in spreading Obedience and other patriotic values.

And that very Obedience will eventually see an end to the scourge of this virus by making it no longer necessary to keep banging on about it, at which point hardly anybody will notice it.

Indeed, it has been renamed by some secret scientists working in a lab beneath Bill Gates, the Stealth Virus because it makes millions of people ill without their even realising they are ill and fools them into thinking it is not at all deadly by not killing them (or making them ill).

Nevertheless, even though I fully understand that the pandemic was a necessary, unavoidable fraud to consolidate your power and Save The Oligarchy, I am still terrified because no matter how not-at-all-horrible this COVID thingy turned out to be, the seasonal flu is EVEN WORSE.

Yes, it turns out that the seasonal flu is even more deadly than the COVID flu, despite their uncanny similarities!!
It is terrifying to think that the threat of flu and COVID have been around since the dawn of time and nobody noticed this!!!

In fact, I have read authoritative, conclusive press releases in the The Nude Scientist, The Daft Report and other learned journals that Conservative Party scientists working closely with our Wise Leader have proved beyond reasonable thought that COVID19 wiped out the dinosaurs!!!!!

Yes!!!!!! Yes not even the Triceratops or Brontosaurus were immune to this pandemic - and they couldn't even read newspapers!!!!!!!!
In light of that shocking discovery that has left proper scientists both dumbfounded and ignored, the Prime Minister has wisely told us that he has NO CHOICE but to command everybody to live out their days fed by intravenous drips, with their brains wired up to VR (which is nicer than reality anyway) in a sealed sterile bubble so as to avoid going the way of the dinosaurs!

Some doubters such as socialists and other scum wrongly assert that lying in a plastic bubble not doing anything is not much of a life but, as the PM responded on TV last night with every ounce of sincerity in his ample frame, "not having much of a life is preferable to possibly dying eventually (which is EVEN MORE terrifying when you think of all the things people can die of and must be protected against, such as breathing, walking about, voting Labour etc)."
Churchill himself could not have put it better!

Remember, these measures to shut down the country, destroy the joy of living and so forth are for your own good!!!!!!!!!!!!!!!

We may not actually live longer but it will sure as hell seem like it.

So try and have a little gratitude and Remember The  Mantra:

OBEY
DON'T NOT OBEY
SAVE THE OLIGARCHY