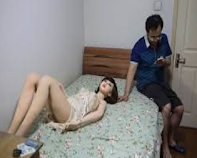 The world has been left reeling in shock today with the announcement that distraught Arthur Mental (49) of Leatherhead in Surrey is to sue the PerviDo Corporation (PDC) for a sum experts have described as “undisclosed yet probably ridiculous”.

The move comes after Mr Mental was left heartbroken when he caught his life-partner, Susie, in bed with his best friend and lodger, Colin.


Arthur and Susie had enjoyed three blissful years together until the fateful day last month when he came home from work early to find that Susie was not in the cupboard she normally occupied during the day and was in fact in the spare bedroom in the arms of the lodger.

In the ensuing confrontation, Colin admitted that he and Susie had been “seeing one another” behind Arthur’s back for several months.

Understandingly devastated by the betrayal, Arthur did the only thing he could to see that honour was satisfied: he immediately began legal proceedings against Susie’s manufacturer, the Japanese corporation PurviDo, on the grounds of his doll’s infidelity.

The corporation is the world leader in the design and manufacturer of authentic and convincing sex dolls, with tens of thousands of satisfied yet inordinately sad customers across the globe (or plane if you are of the Flat Earth persuasion).

PDC is famed for the life-like authenticity of its sex dolls, its global advertising distinguished by now near-legendary slogans such as: “Just Like a Real Women but Reassuringly Motionless”, “Not Very Bendy but Perfectly Safe” and other classics.

Arthur, as you may recall, was the first to buy the Susie 69 model upon its release three years ago. At the time she was the most advanced sex doll on the market, released with a range of innovative Authenticity Upgrades that made her more like the real thing than ever before. In that same year she became the first non-human to win the annual Miss World Contest after the rules of the contest were changed thanks to a relaxing both of entry qualifications and the worldwide grip on reality.

A year or so prior to Susie 69’s release, a workplace accident had seen Arthur permanently deprived of all sense of personal embarrassment. He successfully sued his then employer for compensation and subsequently invested the half a million pounds awarded to him by the court in purchasing the first Susie 69, state-of-the-art “girl of his dreams.”

Susie 69 came complete with a range of upgrades that made her almost irresistible, disconcertingly life-like and even more difficult to distinguish from the real thing than any of the preceding models.

Those upgrades include frequent headaches, the ability to fake an organism and a “vocoder” app that enables her to hold interesting conversations about football drawn from a 50 gigabyte FIFA database, together with a further 50 gigabyte store of useful authentic phrases such as, “You are going to take your socks off aren’t you?” and “Don’t worry, it isn’t size that matter but what you do with it” and “Before we start, did you remember to put the bins out?”

Susie 69 even came with a marriage certificate and a legally binding wedding ceremony (lavish reception courtesy of PerviDo) thanks to the newly-passed “Pets, Dolls and Household Appliances Act” that extended existing same-sex marriage laws in an effort by the government to “treat complete loons like sensible people”.

By his own account, things between Arthur and his latex-and-titanium bride were blissful for nearly three years and they were as happy and in love as any other couple where the partnership is up to fifty percent living organism.

Yet with hindsight, Arthur says he should have seen the writing on the wall and feels that PerviDo had made Susie 69 so irresistibly gorgeous that she began to make him feel inadequate and undeserving the way real women do. This affected his confidence and his performance wilted.

Susie meanwhile was simply so gorgeous she inevitably attracted a string of admirers. This coupled with her inability to “simply say no” to any sexual advance was, Arthur contends, a recipe for disaster.

Arthur’s lodger, Colin, and Susie were both unavailable for comment.