Hypochondrapocalypse: Rise of the Almost Dead 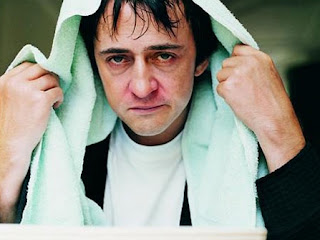 Armageddon Entertainment presents a harrowing portrait of an apocalyptic future in which the human race succumbs to a mysterious epidemic of uncertain provenance that threatens to cause humanity to worry itself into early extinction.

Will Homo Sapiens become the first terrestrial species to die out without having anything particularly wrong with it? Check out the movie to find out.

It presents a new, imaginative - yet at the same time inordinately depressing - slant on the global apocalypse scenario.

Three hundred mad scientists obsessed with the idea of helping humanity by taking a chemical cosh to human brain chemistry team up with a pharmaceutical giant obsessed by dreams of global market domination. It is generally regarded by the world at large as the sort of idyllic alliance that can only produce all manner of benefits and from which nothing could possibly go wrong.

Meanwhile in a secret laboratory buried deep under the Mountains of Filthylucre, everything goes (unexpectedly) wrong. The mad scientists spawn a wonder drug that causes people to imagine they are ill. This has the beneficial effect of causing the major shareholders of pharmaceutical giants to become incredibly rich by inducing millions of people the world over to enthusiastically buy their remedies without the inconvenience of having to have anything wrong with them to start with. This is a win-win for everybody and generally regarded as the greatest boon to mankind since the invention of the cigarette as a cure for lung congestion - although the lion’s share of the aforementioned booning does, admittedly, accrue to the drug manufacturers.

Be all that as it may, a Golden Age of human health treatment is confidently expected, with lots of drugs for everyone and being ill no longer an arbitrary prerequisite for scoring some treatment. This is especially so because one of the side effects of the new wonder-drug, Hypochondrion, is that the user ceases to worry about being hopelessly in debt to the banking cartels as a result of having spent all the rent money feeding the latest habit they have seen advertised. It also provides the added comfort of making it easier for people to cast aside all nagging doubts and other impediments such as common sense and believe they are the proud owners of the latest fashionable illness that has become all the rage.

But unbeknownst to unsuspecting and inordinately gullible zombie-like hordes of minions known as “Consumers”, who roam the land in slavish obedience to subliminal messages known as “Adverts”, the wonder drug has been secretly made to induce unshakable dependency in the user.

The Consumers are hypnotically predisposed to believe everything they are told by genetically modified politicians and keep electing them for their skill in “reversing the nation’s fortunes”: rendering the most technologically advanced civilisation in history completely bankrupt, a feat hitherto considered impossible.

Thus, nobody is at all worried about the dependency engineered into the new drug. It has after all been done with several thousand other drugs without creating more than the occasional minor problem such as shortening the lives of a few million people who would have died eventually anyway. Besides, in-built dependency is considered a valid and largely beneficial marketing ploy for ensuring repeat customers and increasing market share.

Other Consumers are even more fortunate: their lives suddenly seem to stretch on interminably even while they are convinced they are going to die at any moment. In fact, they do not actually live longer but they are rendered so miserable that it just seems like it.

Our story begins shortly after the inbuilt dependency proves to have been a tad overdone and the increase-of-market-share thing gotten right out of hand. Almost everybody is now on the drug and an epidemic of imaginary viruses, bugs, ailments, agues and complaints has swept the land, placing most of the population in the vice-like grip of probably fatal illnesses, with upwards of ten million people expecting to die at any moment.

Only a handful of people are immune. These are the “Sensibles” who survive the imaginary apocalypse by virtue of never having tried the wonder drug, preferring instead to cover themselves in protective layers of coconut oil and drink powerful antidotes such as fermented yak’s milk.

The story centres around the efforts of a small but inordinately healthy band of Sensibles to survive in the bleak post-apocalyptic wasteland. They wander city streets that have become rat-infested and as deserted as graveyards because millions of the Consumers have stayed in their beds waiting to die of Man Flu, backache and other fancied aches and pains that could only be brain cancer, infestation by alien parasites or radioactive contamination of the porridge they had for breakfast. Millions more meanwhile have become beset by a hollow-eyed fixation on pcs as they google their symptoms on the internet.

Much of their adventure centres around the survivors’ efforts to help their stricken fellow humans, mainly by trying to convince them there is nothing really wrong with them. It is an endeavour fraught with danger as the effort induces frightening levels of sarcasm and near-fatal resentment in many of the zombies they try to help.

Will our heroes survive? Will they be able to save humanity from the anxiety epidemic or will humanity become enslaved to the evil giants of Big Pharma who rule the wasteland from their dark and sinister Towers of Avarice?

Watch the movie to find out. You won’t be disappointed although it will give you a headache only remediable by chemotherapy .