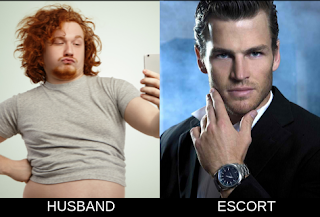 The escort agency - in which men pay women to be seen with them and pretend they like them - has become something of a boom industry of late.

The boom has occurred as more and more men have discovered that it is easier to pay in cash for women to be nice to them than by the traditional barter system of doing the dishes, mowing the lawn, remembering anniversaries and wearing fresh socks occasionally.

But women are beginning to feel left out and so a new escort agency has entered the scene. The Man-U-Like Agency caters specifically for the needs of women by providing, for a small sum, a male escort who will give them the "Full Fantasy Husband Experience".


For the millions of women reading this article who are not quite sure what that experience entails, on account of having been married for a while, I invite you to recall what you thought your husband would be like before you actually got married and he became your . . . er, husband.

It is this novel experience that Man-U-Like's in-house or take-out service provides. Each of their male escorts is extensively trained for three years by female instructors, during which time the trainees are divested of all the false ideas they had about what husbandry entails. The training teaches the men various skills that equip them for the fantasy role-play that will be expected of them when they qualify. These include but are not limited to:
The fully qualified escort will for the modest sum of three hundred pound an hour, provide his client with the full Fantasy Husband Experience, which can include as the client's needs dictate:
The experience requires some suspension of disbelief on the part of those engaged but skilfully done it can nevertheless be quite convincing.

The service has proven popular even in the few weeks since its launch to such a degree that it is gearing up to recruit and train thousands of new escorts and the waiting list now comprises over ten million eager women in Berkshire alone.