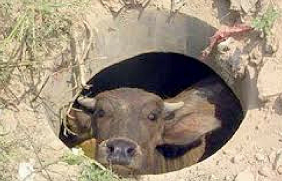 cow with a rabbit.
by Steve Cook

The birth of the first bovine-rabbit hybrid - known as the Cabbit - came after many years of failed attempts, mainly due to difficulties in finding a bull willing to participate in the unusual mating process.

The purpose of the research was to provide a much-needed shot in the arm to the veal and beef industries by producing a cow that would breed like . . . er, rabbits, with a calving Cabbit able to produce a litter of ten or more calves three or four times a year. The economic advantages of the increased yield are obvious.


So far so good but the eventual success of the project has a down side in the form of an unintended side-effect. Whilst able to out-breed a traditional cow in a ratio of about twenty-to one, the Cabbit unfortunately has demonstrated another typically cunicular (rabbit-like) trait and that is its preference for digging and living in underground warrens. A typical burrowing cow in its habitat is pictured above

The penchant for burrowing has made round-ups a problem and milking time a complete nightmare but the economic advantage of massively increased yields, it is argued, completely outweigh the disadvantages.

However, scientists are now warning that the vastly superior breeding capability of the Cabbit threatens surface-dwelling cattle with extinction. The government's Ministry of Anxiety has gloomily predicted that the sight of cows grazing in fields will soon become a thing of the past.

Experts, however, have pointed out that the sight of cattle grazing in the nation's fields has already become a thing of the past so it is unlikely anyone will notice. Admittedly, the latter phenomenon has less to do with a genetic engineering cock-up than economic cock-ups foisted on the farming industry by genetically modified politicians.

It is also now beginning to emerge that, while normal cattle can be fenced in, it is much harder to control where the Cabbit burrows. Escaped Cabbits, with interest in little else except breeding and burrowing, are thought to be responsible for the disappearance of the Hertfordshire village of Wye-Bothrin a few miles from the DNA-U-Like Institute that carried out the ground-breaking research.

The village, you will recall, vanished last Tuesday into a large two-mile diameter sink-hole when the earth's crust beneath it inexplicably collapsed.