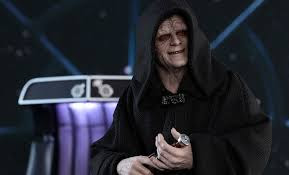 It is a tradition of the Empire that we bring in the new year with a seasonal broadcast from your Emperor, Avaricius Vexus, secretly filmed at a location that must remain . . . um, secret, for security reasons.  Here is a transcript of this year's Imperial message.

At this time of year, the winter solstice, it is incumbent upon all of us to reflect upon the message of great spiritual leaders such as Jesus Christ and other pinko liberal troublemakers and, for some us, to congratulate ourselves on how far we have come since those bad old days when the idea that we should all be nice to one another was first insinuated into the affairs of men.


It was of course a jolly nice idea if you like that sort of thing but not very practicable. Scientists have since proven that being nice to people is actually impossible, at least for those of us charged by higher authorities, such as ourselves or the voices in our heads, with running the planet.

By “running the planet” I do of course mean “milking it” as the two terms as we all know are virtually synonymous.

But far be it from me to discourage your valiant efforts to be nice to each other, kind to animals, turn the other cheek and so forth. Indeed I’m all for it, especially the turning the other cheek bit, to which one could perhaps add being meek and mild because, let’s face it, I would not be where I am today if you did not.

Of course, turning the other cheek is an admirable quality in any minion, especially if it incorporates turning a blind eye as well. And I would greatly appreciate it if you could include in your meekness and mildness doing as you are told, paying your taxes and not kicking up too much of a fuss about the odd war, the occasional salutary brush with poverty, eating chemicals, being irradiated and other mild inconveniences because these are as you know essential to the basic human rights of multinational corporations to make pots of money.

And make pots of money they have! So rejoice! Be duly gratified that my friends, such as Lucifer Beelzebub III, CEO of Grimm Reaper Pharmaceuticals and President N. Slaver of the Hoaks and Fleece Debt Emporium, would like me to extend to you on their behalf their sincere thanks for your cooperation in making this another bumper year.

And what a great year and, indeed, brand new decade we have in store for you!

Our first treat will be to usher in a golden age of mass drugging. For the small minority of a few thousand million ingrates who are a bit unhappy about the way things are going, my message to you is “don’t worry!” Mass drugging is now only a short distance away and when that relentlessly happy day dawns, none of you will be able to worry about anything ever again!

And if you are concerned that being pumped full of chemicals might in a mere ninety percent of cases cause the loss of all ability to feel (or, indeed, think - and sometimes chew as well) please bear in mind that this is but a small price for you to pay for my peace of mind.

I mean, stop being selfish for a moment and consider for once what it has been like for me trying to run this shambolic planet full of people who insist on all manner of luxuries such as not being killed or having minds of their own?

Consider too the inconveniences I contend with on a daily basis, such as having to operate in secret or through proxies, living out my days in a fortified penthouse and so on for fear of mindless extremists such a citizens taking exception to destruction of the environment, the drugging of their children or the occasional paroxysm of mass slaughter and other economic necessities.

Imagine the daily terror that is my lot of being found out and strung up from the nearest lamp post by a mob of human rights activists, parents and other lunatics.

After all, we can’t all be rich and powerful or have the rest of humanity cowed into slavery can we? It is just a stroke of luck that God has chosen me to be rich and powerful and in charge of the cowing and the rest of you to be . . . er, not. It is a scientific fact that slavery is the only economic system that works for me and if it works for me it is ruddy well going to work for you too, albeit our respective roles in the great scheme of global dominion might be a tad different.

All this is but a small price for you to pay for the New World Order I would like to prevail upon you to accept. And by prevail upon I mean, of course, "force." The creation of this New World Order, which would be immensely popular were it more popular, might I remind, you necessitates some degree of war and killing in order to bring all war and killing to an end and, of course, the de-stabilisation of a few things such as planets, economies and so forth so as to bring about stability. After all one cannot break an omelette without breaking a few eggs.

In the meantime, until my psychiatrists can get to you with the happy pills or perchance whip out a slice of the offending grey matter by way of a scalpel, my message to you, dear herd is, "don't panic."

Well, actually I would like you to panic a bit as my newspapers and media arms have been instructing you because there is the small matter of mass inoculation, the close cousin of mass drugging and mass poisoning, for you to consider. You are going to need to buy up stockpiles of the flu vaccine Grimm Reaper ripped - er, sold - the government a few years back during a previous pandemic. This was the Bird Flu pandemic that my former area manager, President Bush, promised (calmly so as not to cause a panic) in 2005 that millions of Americans would die from.

In the end the numbers fell well short of Bush's prediction, which even I and my Director of Mass Culling, Gill Bates (who, being an expert in computer software is clearly thus an expert in everything else),quite frankly, thought was overly optimistic. As it turned out, a mere 257 people worldwide have died from Bird Flu since 2003 but who could predict that all the money invested in germ warfare laboratories would yield such poor results?

A rather disappointing pandemic that. The upshot of it is that Grimm Reaper and their area distribution networks (sometimes inaccurately referred to as "government health services") were lumbered with massive stockpiles of unused vaccine. These stockpiles are now reaching the end of their shelf life so, waste not, want not, we need you to panic and get yourself inoculated as soon and unquestioningly as possible.

Accordingly, you might quite like the new, improved measles epidemic, which promises to kill someone any day now as soon as we can figure out a way to stop people unpatriotically recovering from it.

And I urge you not to be put off by the fact that the aforementioned vaccines contain lark’s vomit and antifreeze. The latter in particular is well known for its health benefits and is known to have saved the lives of millions of automobile radiators the world over (except warm countries).

On the other hand, don't overdo the panic. Just throw reason to the winds long enough to let us jab something in your arms without you feeling compelled to ask silly questions like "is it safe?" or "does it have any side effects?".

I don't want you worrying your empty noggins about such trifles because the wheels of our asylum - I mean civilization – do need to keep turning and so forth. And keeping them turning is no small task. As you may have noticed, it requires a great deal of sweat, blood and tears on your part. So put your backs into it.

This is the season for you to think about increasing your charitable donations to worthy causes such as the “Save Our Oligarchy Fund”, “Alms for the Rich”, and Gill and Vampira Bates’ LUCKY ( “Let Us Completely Kill You”) Foundation.

With that in mind, I need you to go on taking out the loans and paying off the interest by taking out more loans, electing lunatics to high office, taking your medication and pulverising whatever misbegotten population my regional managers point you at.

I mean, where would Rome have been had its slaves all gone around objecting to small inconveniences such as not having any rights, being nailed to trees, being set alight for entertainment purposes and so forth, instead of getting on with cleaning the toilets, polishing the amphora, servicing their mistresses, providing matinees in the Coliseum, carrying rich criminals on their backs and other essential tasks? Eh? With that sort of behaviour Rome might have declined and fallen.

Good! So no more than a Level 3 panic if you please.

In case you are not sure what a Level 3 panic is exactly, I'm having my propaganda arm, the Daily Wetyourself, Propaganda Monthly and the Armageddon Monitor issue a new Panic Scale so everyone will know where they stand (or keel over) panic-wise.

It will make the press' job of getting across the exact amount of panic required much easier and help avoid any misunderstandings.

For instance, the current level of panic required is level 3 as you will recall, if you were paying attention, I just mentioned. Unfortunately due to shortcomings in the press that will see heads roll if certain so-called journalists and editors do not buck up their ideas, the response from the Great Unwashed has often of late fallen woefully short of the level of panic required, often reaching no more than a Level 2 panic.

Let me be perfectly clear about this: Level 2 does not allow fortunes to be made from selling specious solutions to a public blinded by terror. Level 2 is for getting the public to victimise hand-picked minorities or elect complete idiots to government.

The scale will ascend through five levels as follows:

And, in case you were wondering, this is the scale of PANIC required. It is completely different from other scales such as the scale of DISEASE, which runs from minor health problems (for example malaria [only 3,000 deaths a day worldwide], drug side-effects, radiation poisoning etc) right up to full-on pandemics which are really scary by virtue of starting with “pan” instead of “epi” (for example Bird Flu that claimed a staggering 256 deaths in only 6 years!) and Measles, which could have killed millions had they not recovered from it.

I hope you have all got that straight in your skulls. Just trot along and take your shots and nobody will get hurt. I'll probably order management to make it mandatory in any case and who in their right mind will object to that while we are having our mass nervous breakdown?

With a bit of luck we might even be able to get a war going into the bargain.