The skeleton is out of the closet 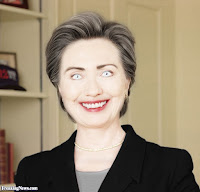 Wild and irresponsible speculation about Hillary Clinton’s health were brought to an abrupt halt earlier today with the publication of a full and damning report that appeared in this week’s issue of the medical journal Hysteria.

The report was written by medical expert and psychiatrist Dr Wantme Hedexamind, of the Joseph Mengele Brain-U-Like Institute based in Deranged, Nebraska. Dr Hedexamind is an expert in Occult Psychiatry, a new science that recently scientifically discovered that mental illness and related fictions do not spring, as was until recently thought, from the tendency of the human brain to evolve over millions of years into needing drugs to work properly.


Minutes of painstaking speculation allied to a scientifically tested failure to think up anything better, led the scientists of the Institute to a new discovery. Mental illness springs instead from demonic possession and related paranormal phenomena, which by an amazing coincidence are also as inaccessible to scientific proof or diagnostic criteria as the earlier diseased brain idea.

By a second amazing coincidence, demonic possession is also only treatable by drugs that are, by a THIRD unbelievably amazing coincidence only available from the Institute’s main sponsors: E Lie Lilly, Paxo Smith-Bribe and Monsatan.

Dr Hedaximnd, in writing his authoritative and unquestionable report, drew heavily on research data supplied by an expert who cannot be identified for security reasons, plus some inspiration drawn from the British TV Series “Being Human”.

Theories as to the dire state of Hillary Clinton’s health have abounded in recent weeks, particularly since her recent collapse whilst getting into a van on 9/11 in New York.

Collapsing whilst getting into a van (or indeed out of a van) is an event not uncommon in New York or among politicians, although it was the first time a presidential candidate was filmed doing it. This predictably caused quite a stir with millions of bloggers with certificates in such sciences as Swimming a Width and Text Messaging offering their expert opinion.

Her later attempt to have all Donald Trump’s supporters shot for treason also made people suspicious she might be suffering from dementia – or a rare psychiatric disorder known as sensum commune (common sense) depending on your point of view.

The 2,312 theories as to why she appears at times to be unwell and thus even less fit than previously thought to be the leader of the Free World (Iceland) were recently listed in a scientific publication issued by the Republican Party entitled “What’s Up With Hitlery?” They include:
And so forth.

However, Dr Hedaxamind’s report has established beyond reasonable thought the real reason for Clinton’s erratic behaviour.


“Her collapse in broad daylight in New York – an obvious hypersensitivity to sunlight – added to that her pallor and unnatural stare, were the first clues. Factor in her lack of empathy or moral sense and the rabid rages and it was then an easy matter to make up an explanation only the mentally ill would question: Hillary Clinton is a vampire.”

Suddenly it all becomes clear. Quite obvious now that it has been pointed out.

Experts believe she may have contracted her vampirism after being bitten by her husband Bill.