Millions of Journalists and Politicians Diagnosed with CLD as Mental Health Epidemic Spreads. 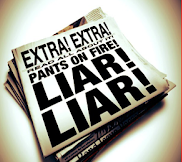 It is a condition that describes the behaviour of someone who is pathologically incapable of not lying even when there is no need to. The sufferer believes that if he stops lying even for a second, something horrible will happen, such as peace breaking out, the country being taken over by sensible people or millions of citizens and other subversive minorities developing trains of independent thought.


​Compulsive lying disorder is not included in psychiatry’s Diagnostic and Statistical Manual of Mental Disorders (DSM-IV) which has hundreds of made-up disorders but no real ones. This is due to the scientifically proven fact that if the manual listed people who are truly insane, all sorts of upstanding citizens such as warmongers, arms dealers, psychiatrists and John McCain would have to be locked up.

Although many people outside the psychiatric profession think that CLD should be declared a mental illness, psychiatry and the government (which are pretty much the same thing) have instead responded to the crisis in the usual manner by ignoring it and pretending everything is all right. This had enabled them to avoid a nightmare scenario of having the general public realise that most of their politicians and journalists are demented.

It would after all be inherently unfair to journalists and politicians and a violation of their human rights to create mayhem to have large numbers of people see them as not right in the head. CLD is not after all their fault and they are but victims of an illness whose provenance is as yet little understood but is believed to be the manifestation of a deeper underlying psychosis involving money and the delusion that other people are cattle.

To label journalists and politicians with CLD would inevitably stigmatise two of the noblest and not-at-all demented professions in the history of the world. It would lead to the false idea that one cannot trust people who can’t tell the truth and leave us bereft of their vital services. Such services include the creation of jobs in the arms and undertaking industries, spanking new regimes in Ukraine, Syria, Libya, the U.S. and other theatres of peace and justice, keeping Hillary Clinton out of gaol, the abolition of democracy and other benefits of a modern, enlightened barbarism.

Many minutes of making things up usually occur before a new mental illness is entered into the DSM, whilst in the case of CLD, many millions of hours of political speeches and column inches have been compiled to back up the contention that the spread of CLD has reached epidemic proportions.

But why does CLD seem to afflict politicians and journalists in disproportionate numbers? Scientists think that this may be the result of a weakening of the immune system of people in these professions occasioned by the sniffing of too much nose candy or the loss of moral antibodies that in normal people combat tendencies towards deviant behaviour. Or the disease may have existed undetected for decades, affecting people at random and propelling people who are suffering from it into professions where their aberrant conduct is most likely to be accepted as normal.

The exact mechanisms that give rise to CLD are not known because the human mind is as yet little understood or, indeed, used. It is, however, thought possible that CLD may result from earlier trauma such as the environment not being chaotic enough or not having enough money or power whilst having no other skills by which to get their hands on any.

A CLD sufferer is easy to spot. Individuals with the disorder simply cannot stop themselves from misrepresenting the truth and are unable to control their compulsion to lie. Either that or they don’t want to.

The compulsion is always attended by a lack of guilt, regardless of how the lies may affect others in various ways, such as starting World War Three or bringing down the governments of countries that were minding their own business.

The lack of guilt was thought to derive from the fact that the sufferers become so caught up in the lies that they are telling, they begin to believe them. It has since been discovered though that this is not the case: the sufferer remains fully aware that they are lying and even when confronted with a lie they have told, they will avoid admitting they have lied by telling another lie.

It is now believed the CLD sufferer believes that in lying he is serving a higher purpose that makes shafting his fellow human beings okay. It is not yet known what that higher purpose is although researchers suspect it is something to do with Satan, space aliens or Zionism (which are all pretty much the same thing).

People are advised not to approach a CLD sufferer or ask them anything because close proximity can make innocent bystanders feel as if they are losing their grip on reality. It is thought best until the epidemic is under control to avoid gifting them positions of power or reading newspapers.

There are at present few treatment options for the disorder. Heavy sedation or quarantine appear to have some workability whilst anecdotal reports indicate that there is a natural remedy, involving stringing the sufferer up from the nearest lamp post, which may in time prove either effective or popular or both.