New speed limits for pedestrians in force by 2021 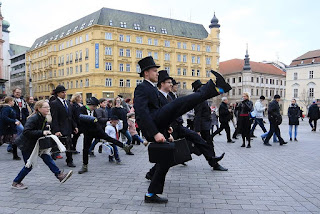 The government today announced that as from 2021, new speed limits for pedestrians will come into force. The move is a response to growing fears about the safety of pedestrians on the nation's pavements and is an effort to reduce the casualties that could possibly happen to people all over the country as a result of potentially fatal collisions caused by people walking too fast, not looking where they are going and losing control of their bodies on tight bends and so forth.

The matter was brought to a head recently by the tragic death of George Dimm of Knockerdown in Derbyshire whilst on a day trip to London. Mr Dimm died at the junction of Mincing Lane and Fenchurch Street when he took a corner too fast, lost control and veered into the road where he was knocked down by a bus.

Whilst a postmortem later revealed he was well over the drink-walk alcohol limit at the time of the tragedy, the incident nevertheless underscored the government's growing safety concerns. As a spokesperson for the Ministry of Silly Walks (MSW) explained:


"This tragedy is but one example of the kind of senseless death that almost occurs a million times a day on account of people irresponsibly walking about in a reckless manner and it simply has to stop before someone else is hurt. This government is absolutely committed to people not getting hurt - except through the usual, official channels of invading countries, psychiatric treatment, vaccines and so forth."

Another case in point that highlights the threat to the safety of every citizen is the severe bruising sustained by Dorothy Cornfoot in an horrific collision in the centre of Leicester last Tuesday. As Ms Cornfoot explained:


"I was late for work and, I admit, in a bit of a hurry and walking much too fast for the conditions - which were wet. I overtook a slow-moving pensioner in a Zimmer frame and collided with a lamp post coming in the opposite direction."

It was that latest tragedy that finally spurred the government to take strong action before anyone else gets bruised.

Accordingly, there will be stiff fines for anyone exceeding the new two-miles-an-hour speed limit in built-up areas and three miles an hour on open country pavements.

In addition to exceeding the speed limit, there will be fines and possible walking bans for repeat offenders for such offences as:
This will of course have an effect on many of the nation's joggers who will henceforth have to jog very slowly - although those unable to jog very fast, believed to be in the majority, will probably not be affected at all. However, a new Jogging Licence will be introduced: the sum of £500 per year will authorise anyone who wishes to do so to go on torturing themselves in the traditional way. The licence will not, however, entitle anyone to jog whilst texting for obvious reasons.

The pedestrian speeding fines and jogging licences are estimated to provide an additional revenue for the government of a £100 million per year, although the MSW spokesperson was quick to point out that,


"These measures are driven entirely by our concerns about looking concerned about public safety and have nothing whatever to do with squeezing extra revenue from the citizenry."

Concerns over the safety of jogging grow as nobody can recall ever seeing the same jogger twice.