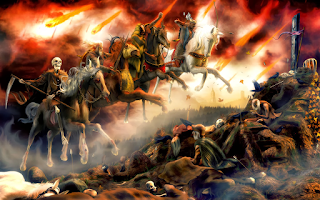 97% of soothsayers agree that ye apocalypse
climatic be upon us

Here is an interesting quote from an historical document that dates from the Middle Ages – more precisely, right in the middle of what we now know as the Medieval Warm Period (roughly AD 950 to 1300).

The Medieval Warm Period was a successor to the earlier Roman Warm Period and predecessor to our contemporary warm period.


The people living during that earlier warm period of course could not have known that it was to soon be followed by the “little ice age” that started in the 1500s and ended in the 19th century when the world started warming up again – a warming that seemed to peter out around AD 2000.

The document, found during excavations of a timber-framed whore house in Ashton-Under-Water, is entitled “Ye Olde Nutter’s Almanac”. The snippet given here provides us with an insight into the alarm occasioned by the phenomenon known at the time as “Ye Horrific Warming of ye Planet”.

Truth be told, however, according to other historical documents, the sense of alarm only set in thanks to the campaigning of the soothsayer Alfonso Gorio, leader of the sect known as Ye Righteous Harbingers of Doom, who toured Europe foretelling the immanent advent of “Ye Apocalypse Climatic” and advising one and all to (a) engage in some heavy wailing and gnashing of teeth, (b) abandon all hope and (c) atone for their sins by giving him lots of money.

Historical evidence suggests that before Gorio, with the help of the Confederation of Town Criers, convinced everyone that things getting warmer were the work of Beelzebub, people had been quite enjoying the milder climate as things had previously been cold and unpleasant for a few centuries.

The following excerpt is attributed to one of Gorio’s disciples, one Devius Avaricius, a London silversmith who made a fortune lending the Duke of Westminster “one thousand pounds of finest silver” (a very large sum in those days) to build a network of “dykes and palisades” around his estate to protect it from “ye prophesied flooding of ye valley of ye Thames” resulting from the expected boiling of the waters of the North Sea. It is quite likely a copy of his sales pitch to the aforementioned Duke.

A diary of Avaricius, now on display at the British Museum of Cons and Capers, contains a reference to the Duke, of whom he opined, “there be one born every minute.”

Be all that as it may, we can present here a glimpse of the consternation that arose once the idea got around that not only was the mellowing of the climate not a Good Thing but a symptom of human folly vis-à-vis the obsession of people with trying to live comfortably, something known to be impossible – except for aristocrats.

“Ye horrific warming of ye planet continueth without respite to such degree that summer endureth well into September and the natural order of things becometh so displaced and awry that ye Thames no longer freezeth in winter, there now thrive vineyards in Shropshire and there be such a horror as English wine, much to the disgust of ye French.

“Ye venerable soothsayer, Alfonso Gorio, hath predicted – a view shared incidentalie by 97% of soothsayers and prophesiers across ye world – that ye consequences most dire shall in five years or less include the inevitable boiling of ye waters of ye oceans and a melting of ye ice that be rumoured to lie in vast fields to ye far North and South. A plague of camels shall beset Europe as they migrate out of Arabia in search of escape from ye furnace heat that causeth a thousand Bedouins to spontaneouslie combust. Ye skin on ye heads of peasants shall blister, at least for those who cannot afford hats.

“Gorio be most assuredly ye greatest expert in such matters climatic for God told him so in a dream and if God sayeth so, that be good enough for me.

“Besides, he speaketh with such certaintie (Gorio, that is, not God) and be so respected ye length and breadth of Europe that he chargeth ye punters an ounce of silver just to hear him speak.

“Some say the cause of this emergencie of ye climate be ye insistence of ye peasants upon burning wood to make fires for such frivolities as keeping warm or heating their gruel. How could the proliferation of such fires, not to mention candles, not warm up ye Earth? I mean, it standeth to reason!

“God knoweth that ye peasants have bred like rabbits until ye planet be awash with them and over-populated most gievouslie. It is believed there be at least a million people living cheek by jowl in ye British Isles! That be obviouslie too many people for ye land to sustain, which is why it be only fair that ye majority should go hungry and what food and luxuries there be should be ye birthright of ye nobilitie, whom God hath ordained thoroughly deserve it.

“Many - known as ye climate heretics - cast doubts upon ye veracitie and accuracie of Gorio's prophecies. They point out that his earlier predictions as to plagues of frogs and locusts, upon which he rose to fame, have yet to materialise. His supporters, however, contend that just because said plagues have not yet come to pass, meaneth not that they won't and we should not let such heresy loosen ye grip of terror that traditionalie hath brought order by keeping ye serfs and peasants cowering in their place.

"Others claim that ye warming be due to ye activitie of ye sun which goeth through various mysterious moods and fluctuations but this be clearlie ridiculous. For anyone can see if they observe its orbit around ye Earth that ye Sun be, allowing for distance as it rideth quite high in the sky, no larger that a watermelon or pumpkin. How could an orb of such dimensions pack enough heat to warm ye Earth so grievouslie?

“Gorio hath I believe hit ye nail on ye head in declaring that ye warming be ye work of Beelezebub, or God, or both, who have decided to punish Man for his activitie and for not being poor or humble enough . . .”