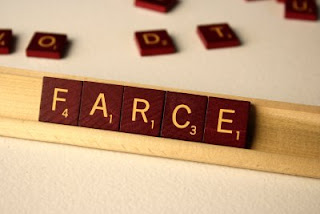 The apparent loss of several IQ points by governments across the Western World may, according to the latest scientific discoveries, be due to a simple lack of clarity in the meaning of some of the terms being used by government representatives (The Media).

This has resulted in a small minority of troublemakers known as "citizens" not knowing what is going on.


Some have even gone so far as to adopt the extremist view that their government has gone insane, and/or is being run by aliens and/or is trying to get us all killed, although to be fair there is little more than evidence to back up these views and it is well known that one can use evidence to prove almost anything true.

Citizen: troublemaker
Western diplomacy: accusing Russia (or Iran)
Aggression: anything Russia (or Iran) does
Justice: blaming Russia/Iran and/or not blaming America
Non-aggression: American aggression
Democracy: Oligarchy and/or Fascism
Lying: diplomacy
News reporting: lying
Freedom: regime change and/or the liberty to do as you are told
Regime change: democracy
Extremism: having other than the officially approved opinion and/or resisting American non-Aggression (see above)
Terrorism: bombing or shooting people when you don't have any tanks, aircraft, missiles or armies financed by tax payers
Peace-keeping: (America, UK, France, Saudi Arabia, Israel) bombing or shooting people when you have lots of tanks, aircraft, missiles or armies financed by tax payers
Liberating Countries (Afghanistan, Libya, Syria etc): demolishing countries to make way for Western Corporations
Rebuilding Countries: lending money to countries just liberated (see above) so they can pay Western Corporations for the privilege of having them walk off with their natural resources
Aid: bombing and/or money lending
War Crimes: slaughtering people without America's permission or explicit instructions
Free Trade: corporate immunity to morality and law
Economics: money lending
Banking: creating money out of nothing (counterfeiting) then lending it at high rates of interest
Third World Debt: forcing banking (see above) on Third World Countries
American National Debt; see Third World Debt above
God: Satan
Threat: governmental hallucinations (always "over there") considered essential for the operation of Democracy (see above).
International Law: lynch mobs (as directed by America).
The Elite: criminal scumbags running America and her vassal states (UK, France etc)
The American People: a slave race living in North America and serving the Elite in the expectation that if they do they will be "safe".
The British People: a slave race living in The British Isles and serving the Elite in the expectation that if they do they will be "safe" - only more cynical about it than the Americans.
The French People: like the British and Americans above only more annoyed about it
Overpopulation: see Threat above
Climate Change; see Threat above
Presidential Elections: popular TV game show in which contestants compete to see who is the most stupid.
Helping: deliberately killing and maiming
Collateral Damage: accidentally killing and maiming someone whilst helping someone else.
Vaccines: efficient, modern methods of injecting people with toxins such as mercury and aluminium (see helping, above|)
War: a hobby (see Economics above)
European Union: globalist empire (Europe Branch)
UK: a province of f the EU
Brexit: leaving the EU so as to become a province of the globalist empire

That's enough rubbish to be going on with.