Operation Flying Pig is launched as it threatens to do the impossible. 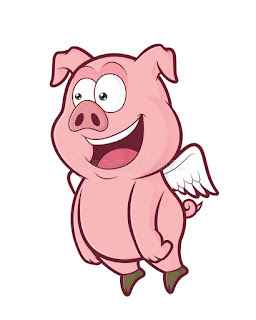 by Steve Cook and Domi Cook

The government has today announced the launch of an ambitous new project that it hopes will see it connected to reality by 2030.

Matt Palaver (Con, Wheedling) of the Ministry of Fabrications explained today that,

"this unprecedented undertaking embarks Her Majesty's Government upon uncharted waters as this sort of thing has never been attempted before. But we are confident that by 2030 or some tine later this government can achieve what many people such as voters and other dissident elements have maintained is completely impossible. We can and will probably have the nation's governance fully connected to reality or something very similar to it."

He cautioned that just as Rome was not built in a day nor the NHS sold off overnight, this will take time to come to fruition.

This is particularly so at the moment with the COVID19 virus now known to cause heightened levels of brain atrophy in politicians  with many convinced they see millions of dead people and many more completely unable to keep accurate statisitics or stop lying.

That confidence is believed by sensible people and other enemies of democracy to be, itself, a symptom of the very malaise the government is seeking to overcome, a mental illness known as  Aversion to Reality SyndromE (ARSE).

Be that as it may, Mr Palaver was quick to lay out the government's plans in more detail, explaining that:

"We have come up with a programme to approach the problem in stages that is as foolproof as Lockdown and we are totally confident that nothing can possibly go wrong."

The first stage of the plan is for things to continue much as they have been for centuries, with the public quietly resentful of a government that seems a bit mad in accordance with long tradition deeply rooted in British history. Mr Palaver told The Daily Scare that:

"We call this as the 'Cooling Off' or 'Long Suffering' phase. We expect it to last no longer than several years and the government will use the time to undertake a detailed multi-billion pound research project to find out what reality is."

The second stage involves the government firmly establishing what planet it is on. They expect to have this wrapped up by 2025.

"At that point, we will be able to embark upon Stage Three, to be achieved by 2026, in which the government will stop mucking people about. While many experts consider this to be impossible, we firmly believe we might possibly, with luck, get this DONE if we can establish that people are not cattle."

In the fourth stage, the government will get its act together. This will be in place by 2028 at the latest and is outlined in a Green Paper entitled, "Getting our Act Together".