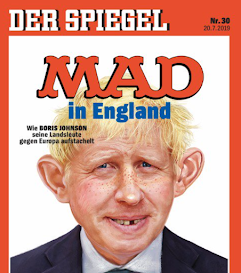 Public advised to socially distance or bring down with a tranquiliser dart if possible
by Steve Cook
Typo City 23/9/20
A tousle-haired, mentally ill man believed to be suffering from the rare psychiatric illness PMD (Prime Muppet Disorder) was today spotted cavorting in and around Downing Street and people such as voters were advised to approach him with extreme caution.
The disorder, caused by a chemical imbalance in the common sense centres of the brain, is known to afflict the charismatically challenged with disabling  delusions. In severe cases, the sufferer becomes so disconnected from reality he believes himself to be a Prime Minister fighting an illusory pandemic and suffers uncontrollable compulsions such as the urge to cull the elderly, lock everybody up (or down) and vandalise the economy.
Known as "Boris" and described by one psychiatric expert as "a complete loony", the man is known to suffer from voices in his head that tell him he is in a "Virus Apocalypse" video game and instruct him to score points by bankrupting his opponents (known as "Citizens") or reducing the Gross Domestic Product to zero.
He is also known to be convinced he has an invisible friend known as Mr Scientist who advises him to save the country from certain death by setting up a dictatorship.
He is often seen in the company of another mental patient who experts are fairly sure is, sadly, not illusory. Known as Matt, he believes himself to be an evil supervillain  known as The Health Secretary, whose Power is the ability to lay waste to entire nations simply by lying through his teeth without a shred of remorse.