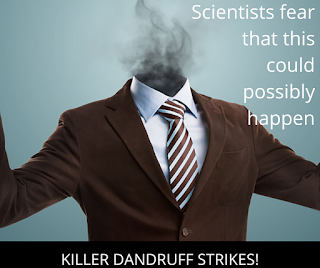 Horrific news more horrifying than the previous horror, everybody horrified

Shock news just in is that scientists have discovered that a new mutation of the terrifyingly horrific media-borne Convid virus is on the loose.

Secret scientists working secretly for the government have discovered that they are worried that the Convid virus might have conveniently yet at the same time horrifyingly mutated yet again!

That makes it twice in the same week and three hundred and ninenty seven times since the Convid crisis began 112 years ago.

The identities of the secret scientists and the top secret notes on the back of an envelope that provide conclusively theoretical evidence that their fears might prove founded if evidence emerges to suggest they might not have been making it up are currently covered by the Official Secrets Act (Clause 1249.8B "Making Sh*t Up).

But it is well known by Borifice Johnson and other messianic figures who have risen to become legends in their own minds that the suspicion (or rumour) that something might (or not) be happening is sufficient grounds for scientifically:

(c) scaring the crap out of Sid and Doris Loon of Sidcup and all three of the other surviving members of the Convid Death Cult.

(d) kicking the country while it's down

The new mutation is a new, as yet unadvertised version of the Convid virus, which is renowned throughout the Sage Committee, Parliament, Fleet Street and other high crime areas for smashing into the country with an epidemic of no symptoms. This is (the worst kind of epidemic because it afflicts people who don't know they are ill.

Per reports, Convid has laid low entire swathes of the populace with a slight (or more devastatingly moderate) cold and has now terrorisingly transformed into something even more horrifying than the last mutation (Athlete's Foot) or the mutations before that (Elbow Warts and Bum Rash respectively).

The new mutation is known as "Dandruff " or HASDO20 (Head and Shoulders DisrOrder 2020) which is tipped to win the MPPA (Most Popular Pandemic Award) for the coming year.

Described by experts as, "just like the Black Death only more dandruff-y and less death-y", it is sinisterl-y identical to traditional dandruff except described as a "threat" or "horrific " or even an "outbreak". This never happened to ordinary, innocent and slightly less fatal dandruff, which just goes to prove how much of a . . . er, threat this . . . er, outbreak is.

This new dandruff is marked by frightening symptoms known collectively as "Dandruff but a lot Worse".

It is highly infectious and spreads at speeds in excess of 30 miles per hour and this breaks the speed limit in many urban areas. It is believed that it may have broken the VLSR (Viral Land Speed Record) and registers very high on the CIR scale (Credulity Infection Rate).

This is per statistics compiled using the PCR test, which is the main diagnostic tool for detecting infection and its rate of spread although some purists cite the technicality that the fact that the PCR cannot actually detect a virus may have compromised the accuracy of the results by as much as 099.99% or more.

But as Jane Gaffsmother of the Ministry of Hysteria pointed out, "When it comes to public's health and well being, we can live with those odds."

The WHO (World Head Organisation) and other pharmaceutical advertising initiatives have waded in with some backup scares, pointing out that an examination of 1000 corpses of people all over the world who died last week of Natural Causes and similar horrific epidemics showed that over 29% exhibited signs of mild to advanced Dandruff.

These "Dandruff Deaths" are thought to be the first proof that a Killer Dandruff epidemic is cutting down innocent great grandparents as young as 84 the world over (especially London).

Having just invented a vaccine for the killer Athletes Foot Epidemic that spread carnage across the world yesterday, scientists have rushed to produce a dandruff vaccine.

The pharmaceutical giant Killerpotions Inc, believed to have had people working through the night with flyers, press releases and chemistry sets, were as of this morning the first to announce they have miraculously discovered a dandruff vaccine.

Named Sterilothon, the new vaccine, which comprises Badger Sweat, dead fecal matter and Head and Shoulders Shampoo, is the first of a new range of vaccines known as DKE (Doesn't Kill Everybody) vaccines declared by the manufacturer and other impartial scientific watchdogs such as the Gill Bates Foundation as proven completely safe and not at all sinister. This came after more than half an hour of stringent safety testing.

The tests, carried out on a sample of 10 million people, proved conclusively that Sterilothon only killed a small percentage (under 98%!) of them after the test labs had carefully screened out subjects likely to die from being injected with lethal substances.

Sterilothon will be available from tomorrow for everybody game enough to risk taking it at a cost of only a hundred million pounds to the tax payer.

The Health Secretary, Matt Crocodile, pointed out this morning in a briefing known as "I am really not lying much this time, honest" that Sterilothon is a,

"total bargain too good to miss!"

Speaking through tears of joy, he went on to say:

"The British public should rejoice that the new vaccine is almost as cheap as yesterday's Athletes Foot vaccine despite being identical apart from having more dead fecal matter in it."