The Bush/Cheney presidency was quite keen on 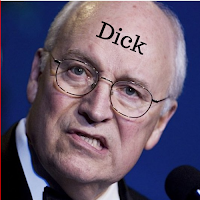 "enhanced interrogation", which is totally different to torture despite being the same in every respect such as the pain involved along with its failure to yield any worthwhile intelligence.

The fact that it yields no useful intelligence is hardly the fault of the torturer and the blame can by justly laid at the feet of the torturee for not knowing anything useful and wasting everybody''s time.

Former vice president and human being Cheney is so enamoured of the practice, however, that  he is quite keen for it to continue. His sentiments are shared by the CIA for the reasons cited above, plus the fact that it has the added virtue of enabling a large number of otherwise unemployable sadists to make as living from their hobby. It is, moreover,  a proven tool by which to bring the world freedom from oppression and is quite okay if you are morally superior and keen to uphold civilised and civilising values by abandoning them.

In case you jump to the conclusion that Cheney and Co are a trifle unhinged, psychiatric experts have today revealed that they can find no evidence that Dick Cheney and his cohorts in the so-called “Gang of Loons” elite terrorist organisation are suffering from a mental disorder.


These controversial findings come as something of a surprise to millions of people who had strongly suspected that Cheney & Co were in fact completely demented after they had decided to embrace an innovative program of inserting things into men’s bottoms or playing them medleys of Kylie Minogue hits at 300 decibels for 3 weeks on the trot in order to uphold and defend justice and civilised values.

Affiliated to the Al Cabala organisation thought to be responsible for 9/11 and the hijacking of Ukraine and several other countries, the gang were recently exposed for what has been described as a "systematic program of humanitarian torture not at all similar to the sadistic varieties of torture carried out by oppressive regimes such as Saudi Arabia and Israel." Yet there is one important difference that makes the gang’s methods all right: they were called “enhanced interrogation” rather than mere “torture”, which is what bad people do.

The interrogation of suspects is mainly enhanced by the introduction of pain for brief periods no longer than a decade or two or, conversely, the introduction of a few cleverly crafted questions such as “go on, admit it, you’re a terrorist, aren’t you?” into protracted periods of pain, whichever way you want to look at it. It works in tandem with other innovative techniques known as “enhanced policing” and the popular “enhanced truth” whereby millions of people are made to suffer by having things called “fibs” inserted into them by devices such as “the press” or making them watch ingeniously rigged news broadcasts involving carefully trained operatives emitting streams of disturbing propaganda from their rectums.

The program has been hailed as a complete success. Although it produced no actual useful intelligence it has produced a number of confessions by “suspects” to a number of atrocities, enabling investigators to at last close the file on such mysteries as the assassination of Abraham Lincoln, the Irish Potato Famine and the theft of George Bush’ IQ. It also had the added virtue of providing career opportunities for people with a talent for sadism, which is known to be a lifestyle choice rather than a personality disorder.

But outcry from a misguided public and similar minorities who hold to the mistaken belief that their country – in a complete break with centuries of tradition - should not be run by psychopaths (something believed by psychopaths the world over to be impossible in any case) has caused psychiatrists to search through their diagnostic manual, the DSM, to find out whether the behaviour of the aforementioned “enhanced interrogators” is covered by any of the 1,993 mental illnesses listed there.

In so doing, the psychiatric community reluctantly bowed to a great deal of unfair pressure from people with all manner of anti-torture prejudices. Most psychiatrists were much too busy drugging the elderly or the nation’s children or marketing the new “Prenatal Depression” disorder to bother with attaching the stigma of mental illness to innocent multinational corporations and political stooges.


“The problem with the uneducated public is that they tend to jump to unwarranted conclusions. A long history of unvaryingly demented behaviour is no reason to suspect the presence of a mental disorder. By that logic, we’d be locking up politicians, media moguls and the heads of large corporations left right and centre, leaving hardly anyone to run the planet except do-gooders who want to be nice to people and not blow anything up - and that has been scientifically proven to be completely impossible. But in the interests of not damaging the public’s confidence in psychiatry any more than it has been already, we decided to have a flick through the DSM to see what we could come up with.”

Dr Hedexamind then went on to declare that:


“There is no evidence that Mr Cheney and the other co-torturers – I mean, enhanced interrogators – is suffering from any disorder known to psychiatry. Inserting things into people, breaking their legs, making them curl up inside small buckets or breathe water and other therapeutic techniques are simply not listed and therefore do not qualify as symptoms of mental illness. Our list of mental illnesses is, as you know, quite extensive, with treatment in the form of drugs now available for such crippling disorders as childhood (Infantile Disorder), boredom (Ennui Disorder), wearing odd socks (Odd Sock Disorder), oversleeping in the morning (Tardive Superslumbria) or talking with your mouth full (Oral Surfeit Disorder), but nowhere can we find listed normal behaviour such as inflicting pain in the name of democracy. There is the common ailment known as sadism but this isn’t really a mental illness, more a hobby, and in any case doesn’t apply to governments or psychiatry. Sadism after all is the inflicting of pain for the sake of it, whereas the government (or psychiatry) has been inflicting pain for political reasons such as being right out of other ideas and, occasionally, fun. In any case it’s just the sort of things that governments do when run by people not at all creepy or mad.”

The Institute also looked for any evidence that admitting the most cruel and heinous acts without the slightest remorse and with the avowed willingness to do it again even though it serves no useful purpose except help start World War Three, might itself be evidence the person is a teensy weensy bit unhinged. Again, it found no evidence and concluded that such behaviour comes with the territory when you are a Vice President or self-elected leader of the Free World.

There are no plans to extend the list of mental illness in the DSM to include such things as torture, blowing up civilians with drones, locking people up without access to justice, warmongering, manufacturing or selling – or using – weapons of mass destruction, graft, genocide or similar perfectly reasonable pastimes.


“Besides,” explained Dr Hedexamind, “we are more worried about real threats to our peace of mind such as people not being drugged. Therefore we are too busy extending the DSM to include such newly-discovered mental disorders as prenatal depression, love of cats and writing distempered Facebook posts about the government and we’ve run out of paper.