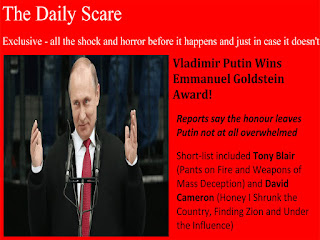 Similar in prestige to the Oscars and known popularly as the “Adolfs” the monthly award is given to the person who has contributed most to worthy causes such as making sure nobody blames the government for the state of the planet or keeping popular oligarchs such as George Soros or Nathan Rothschild from being chased down the street and lynched by angry citizens.

The contribution is invariably in the form of volunteering to be the star of the now popular One-Month-Hate, a monthly festival that was originally the brainchild of the Ministry of Hysteria and its team of ad hoc media advisors such as Rupert Murdoch. The inspiration came from a textbook by George Orwell, which features a modest Two Minute Hate and many other pieces of advice for governments and their handlers seeking dominion over the Earth.

Hence the “Emmanuel Goldstein” award, named after the first man to volunteer his face to be spat at, and have abuse and various pieces of furniture chucked at it in an effort to heroically draw the ire of the citizenry and other terrorist cliques away from the ruling Bankster Party, often described by a few million troublemakers as “the correct target”.

As a spokes-fibber from the Ministry of Hysteria explained: “It is absolutely vital that we ensure nobody starts hating the right target or blaming our woes on the people who actually caused them because there is no room for that kind of extremism in this wonderful democratic oligarchy of ours, where every citizen is guaranteed the birth-right to vote futilely for the people who will ignore them. Thus popular hate-figures provide a valuable service and guarantee the survival of government as we know it.

You can read about the origins of the Hate ritual here although from its humble beginnings it has been refined and expanded from a two-minute ritual for party members and democratized so that everybody can join in the fun, which lasts on average about 1440 minutes every day thanks to the miracle of modern journalism.

The current winners of this coveted award was drawn from a short-list that included Tony Blair (Liar, Liar and Weapons of Mass Deception) and David Cameron (Honey I Shrunk the Country, Finding Zion and Under the Influence) but these two were disqualified as they were nominated by a popular vote of the citizenry. The vote, after an investigation by a panel of experts composed of media moguls, was found to be too democratic and thus rigged in favour of people who are not media moguls or their major creditors.

An expert, who cannot be named for security reasons, explained: “The problem with leaving decisions about whom to hate to ordinary people and other riffraff is that they tend to hate all the wrong people, such as criminals and it has been scientifically proven that the correct people to hate are people who stand in the way of billionaires exercising their right to suck all wealth out of the planet.”

The task of sifting through the nominees was then taken on by an unbiased arbitration service known as PEMO (Panel of Media Oligarchs) and they, in a completely fair and unbiased way, were able to announce this month’s winners.

So the Emmanuel Goldstein Popular Hate Figure Award for Outstanding Contribution Popular Mind Control goes to Vladimir Putin, for his role in the classic “Crimea – Don’t Mention the Referendum” and “The Man Who Was Guilty of Everything He Didn’t Do“. What particularly caught the judges’ eye was Putin’s ability to surround Russia with tanks, deprive the Russian people of GMOs and annoy Barak Obama whilst completely failing to accept Western invitations to their latest war, thus bankrupting the American Miliary-Industrial Complex.

The International Group Award went to Islam for its role in “Scapegoat“, “The Bearded Ones” and “Oil’s Well That Ends Well.”

The award dinner will feature an acceptance speech by the winner in which he will be heckled and shouted down and have cutlery chucked at him by an audience composed mainly of . . . um, media moguls and their psychiatric nurses.

A new flourush has however been added to the traditional ceremony and the winner will also be punished by public blogging.