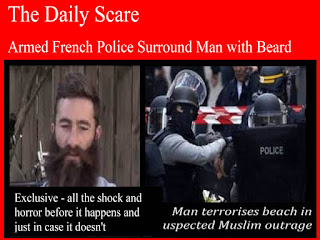 French police today arrested a man after he terrorised a beach in a suspected Muslim outrage.

John Bystander, 23, a British holidaymaker from from Dun Working in Surrey, was sunbathing on the beach at Pas De Fromage, on the French Riviera when he was surrounded by armed police in full combat gear from the elite anti terrorist unit known as the SRRE (Squad Rapid Réaction Exagérée).


Mr Bystander told us what happened, “There I was minding me own business, soaking up the rays when I finds meself surrounded by half a dozen gendarmes waving guns in me face. I didn’t know what was happening at first. They was yelling stuff at me in French. So I stays very still, lying on me back with me hands in the air feeling like a right plonker while they evacuated the beach.”

According to eye witnesses, there was then a standoff for several minutes while a small robot resembling the ones used by bomb disposal crews was brought from the nearby lifeguard station. Lifeguard stations all over France are now manned by units of the SRRE, whose specially trained personnel have replaced the traditional lifeguards in response to a directive from the French Ministry of Hysteria. The directive itself is a response to a top level re-evaluation of Health and Safety risks at French resorts that found the greatest threat to holidaymakers is not from accidental drowning as was formerly believed but from mass panic caused by people who look like Muslims.

The directive explained that looking or dressing like a Muslim or even being a Muslim is exactly the same as being a CIA-trained terrorist off his face on psych meds.

Thus, heavily armed patrols in full body armour roaming French beaches is the latest measure designed to bring a sense of calm to people throughout the Elysee Palace and Washington.

After ten minutes, with the beach rapidly emptying as people ran screaming to the safety of the promenade from whence to watch this latest drama in the defence of civilised values unfold; a small remote-controlled vehicle duly arrived. Operated via satellite by a technician from the safety of an underground bunker on the shores of the Potomac, the vehicle trundled along the beach and approached the still supine Mr Bystander as the police officers watched from a distance behind the safety of their riot shields.

The vehicle stopped a yard short of Mr Bystander’s position. A mechanical arm slowly extended, its pincers presenting the suspect with a razor and can of shaving foam.

A gendarme then ordered Mr Bystander in English to “Shave off ze beard!”

Mr Bystander’s first reaction was to respond in the negative using Anglo-Saxon words of no more than four letters but when it became apparent that the cops meant business and were not about to allow anyone to lie around on their beach wearing a Muslim-style beard, Mr Bystander complied. Once he was clean-shaven, the police and their robot departed, the crowds returned rather uneasily to the beach and life returned to what has been loosely described by the government as “normal.”

A spokesperson from the Ministry of Hysteria explained that in the wake of recent atrocities, the government is determined to bring harmony and a sense of community to all of France by banning all attire or fashions that look slightly Muslim – a measure guaranteed not to alienate anybody (except Muslims) or help the cause of terrorism in any way.

Mr Bystander was fined 20,00 Euros on the spot for sporting a large bushy beard in contravention of a new French law that not only proscribes the wearing of beards on beaches but also forbids women not to wear more than a piece of string to cover their private bits.

Although not a Muslim and merely following the latest fashion in which many young men in Britain grow large, slightly aggressive-looking beards, Mr Bystander told us that on reflection he could see his action in wearing the beard could have, potentially probably upset someone of a nervous disposition, such as his wife. He admitted it was probably irresponsible of him, on the order of walking down a busy thoroughfare wearing a backpack with the word “bomb” emblazoned on it – which had also gotten him into trouble in the resort’s town centre on Tuesday. He vowed to be more careful in future.

The authorities are also concerned by the fact that his albeit deceptive Middle Eastern appearance was also exacerbated by the fact that after ten days of sunbathing he had acquired quite a deep tan. The Hollande government is therefore looking into the possibility of banning tans on all French beaches by erecting large awnings all along the coast under which it will be mandatory for all sunbathers to lie so as to be screened from the sun in the interests of not doing anything stupid.

Meanwhile in the UK, the government has become alarmed by a trend that sees many young men growing beards. The fashion, we are reliably informed by an expert who cannot be named for security reasons, is probably an unconscious expression of sympathy for terrorism and/or a symptom of the islamification of Britain’s male citizens and other potentially dangerous minorities. Therefore, a nationwide ban on beards is expected sometime this year, a measure designed to show the government’s determination to stamp out terror of both the existent and non-existent kind.

Related Story: Is Santa Claus a Muslim? Experts fear that Sharia Law may already have hijacked Christmas. Pictures of the Virgin Mary wearing a hijab cause for alarm say experts such as newspaper reporters.