Deification of President to Proceed as Planned 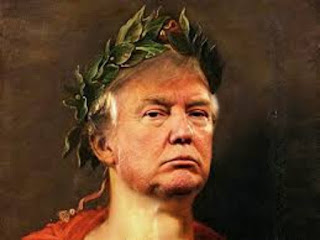 The process of elevating of the US President to the status of a god is now in its advanced stages and is to proceed as planned, the Secretary of Hysteria announced today.

The move to recognize the inherent godlike nature of the current incumbent of the White House follows the example of the Roman Empire, which adopted the highly sensible and enlightened policy of deifying its emperors. That ground-breaking munificence on the part of Rome's kindly and not-at-all-bonkers rulers bestowed upon the masses the opportunity to "putida sit superflua" (drab sand pointless lives).


A spokesperson for the Department of Hysteria, speaking at the recent ceremony to sanctify the White House as as fully-fledged temple said: "If it was good enough for the Romans, it is sure good enough for us. It is a policy that has made the Roman Empire what it is today. We are confident that nothing can possibly go wrong."

One of the highly anticipated advantages of making the President into a god is that it will save large numbers of people the hassle of rational thought or reasoned discussion. Both of the latter will be replaced by easy-to-parrot litanies and mantras such as "Make American Great Again", "It's all the god-Emperor's fault" and "the man's an idiot/genius/Russian agent/strong leader/weak leader,criminal/saviour of America/misogynist"/saint etc etc

Interestingly enough, this is one of those rare instances where the people are one step ahead of the administration, with millions of people already engaged in worship in makeshift cyber-shrines such as the Temple of the Book of Faces and the Twitteric Oracle.

Moreover, a pantheon is already evolving with various gods and goddesses anointed to the celestial hierarchy, such as Hillaria the Goddess of Apportioning Blame and the Irish-African deity O'Bama Lord of the Drones, the patron saint of Short Memories.

Opinions, however, are sharply divided as to whether the incumbent god-President is a divine entity whose every utterance is enlightened and every touch divine or an evil god of the likes of Beelzebub who brings madness and dismay where ever he walks upon the Earth or tweets in the blogosphere.