All 5000 members of a crime syndicate known as “The Elite” are to be admitted to rehab in an effort to handle their dependency on a drug known on the streets as “Satan”. 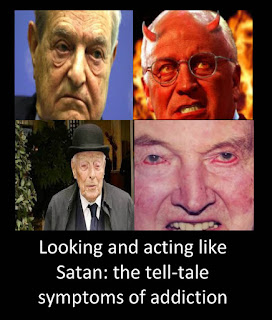 The gang, masterminded by a small tight-knit cadre of geriatric mental patients is thought to be the most successful and wealthy criminal operation in the history of the universe. With headquarters in Washington and chapters in most countries, its nefarious tendrils extend across the world and several neighbouring planets. It is also known by the names “Gang of Loons” or “The Inebriati”.

It rose to power through a cunning counterfeiting operation known as “Banking”, in which people were forced to hand over all their money and replace it with the gang’s IOUs and “promises to pay” that amounted to several times all the money in existence. The impossibility of honouring the gang’s IOUs inevitably spawned a lucrative protection racket in which countries unable to meet the gang’s demands received a visit from the gang’s heavies, known as “The Americans”, who would then set light to their children or commit extreme acts of vandalism on their infrastructure.

But the crime spree took its toll. Among gang members abuse of Satan resulted in widespread addiction and as one member described it: “In the end I could not stop myself blowing things up, drugging children, culling the Third World, becoming President and other acts of depravity.”

He went on to explain that the drug induces a delusional state in which the user believes he is above the law and can get away with things forever. This leads him into an increasingly feverish effort to introduce lots of stupid new laws or amend old laws in stupid ways so that he can be above them.

In more extreme cases, the addict becomes convinced he is a godlike being chosen by aliens to lord it over the entire planet – a state easier to obtain once the planet has nobody else on it still living.

Indeed, among the “Satan heads” the ideal size of the human population is considered to be roughly the population of the Isle of Wight - preferably all actually living on the Isle of Wight and composed mainly of lackeys, henchmen, servants and sex slaves. This leaves the rest of the planet for The Elite to muck about in pretty much as they please, in a string of luxury fallout shelters dotted across the majesty of a post apocalyptic wasteland that glows magically in the dark.

The Satan addiction swiftly becomes impossible to kick without expert help. That help starts with a tough withdrawal programme in which the recovering addict is locked in a padded cell until he can stop killing people without having to be held down – a change that many consider rendered impossible to achieve by the addict’s irreversible brain damage.

The users, in the manner of addicts everywhere, find their lives falling apart around them as they become increasingly alienated from and shunned by the rest of society, or at least the ones still awake. This is mainly due to the fact that the rest of society objects to being blown up, forced to eat food that gives them strange lumps or injected with vaccines laced with neurotoxins and other hobbies favoured by The Elite.

Addicts are known to become increasingly violent in a last-ditch effort to make people like them, often sending in The Americans to convince the citizenry and other hotbeds of resentment the error of their ways, whilst blaming everything on Vladimir Putin who made the classic error of being there.

Amid widespread calls from the general public and other do-gooders that Satan be banned (with some calling for ideas in general to be made illegal just in case some other loon dreams up another stupid one) scientists have found that it (Satan that is, not the general public) causes a list of adverse reactions in the user.

Among these side effects are


That’s enough disorders to be going on with.

Observers, however, have noted that none of the mental problems associated with Satan addiction are listed in psychiatry’s diagnostic manual, the DSM, and appear not to be recognised by the psychiatric community as the symptoms of a deranged brain, whilst almost everything else is. This is probably explained by the discovery that many psychiatrists are themselves gang members.

But there is a glimmer of hope that some of these wretched “human beings” might at last be cured with the development of the new much-praised rehabilitation programme.

The programme includes, as mentioned earlier, a withdrawal step in which the addict is locked up until he can stop killing people or dies, whichever is the sooner.

This is followed by counselling in which the addict is gradually coaxed into not starting any wars, financing Monsanto, blackmailing politicians or dismantling any more countries.

From there he progresses gradually into being nice to people and not holding the world in the grip of fear. Slowly but surely he learns that a world with people in it is not necessarily a Bad Thing and his rehabilitation is complete when he can get himself a proper job and make himself useful.

It is expected that the programme will turn out its first fully reformed graduate by the end of the century.