The government has today announced plans for the establishment of a new ministry. 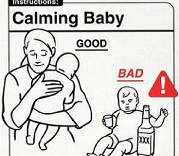 The PTSD (Parental Training and Standards Department) will be tasked with tackling the national parenting crisis that has brought the country to its knees.

The full extent of the crisis became apparent with the arrival at adulthood of a whole generation of newspaper reporters, politicians, bloggers and other subversive elements with a mental age lower than twelve.


This in turn produced the so-called “Blogging Crisis” in which thousands of bloggers proved incapable of having a grown-up discussion, jammed the internet with playground taunts and baby talk such as “Libtard”, “Reptard” and (for those unable to string a sentence together without using the “f” word) “Custard”.

The widespread . . . um . . . retarded development of so many of today’s adults caused much of the blogosphere to suffer a loss of sense of humour as the subtly of jokes such as the Flat Earth Theory, Muslims Hate Christmas and the official account of 9/11 exceeded the general education level and were taken seriously.

The cause of the crisis has been found to be substandard parenting, with millions of untrained and unqualified people having been carelessly left to raise children unassisted by the possession of basic skills such as the capacity for rational thought or indeed, on occasion, knowledge of what planet they were living on.

The government therefore is introducing a Parenting Licence, similar to a driving licence and the possession of a full Parenting Licence (PL) will be required before any person is left in charge of a child – or, by 2025, allowed to conceive one in the first place.

Those wishing to raise children will be required to possess the full Parenting Licence, which will be awarded upon the passing of a rigorous but scrupulously difficult Parenting Test (PT) administered by a qualified examiner (QE) of the PTSD.

Those training for the test will be able to secure a Provisional Parenting Licence (PPL) but will not be
able to take charge of a child unless accompanied by a qualified adult (QA) in possession of the full licence. Provisional Licence holders (PLH) will be subject to certain restrictions (CR) and will not, for instance, be allowed to take their child for a spin on the motorway (TTCFSOTM).

Parenting across the land will be standardised by the introduction of a Parenting Code, similar to the Highway Code and designed to see millions of children moved about safely in often congested homes, schools and supermarkets with a minimum of accidents.

To pass the Parenting Test, the applicant must pass a theory test and then satisfy an examiner that he or she is proficient in a range of vital parenting skills such as:

Prerequisites include:
By 2025 the new licensing system will be fully in place and anyone wishing to become a parent will be expected to take and pass the Parenting Test and be in possession of the full Parenting Licence.

These measures will be flanked by the introduction of new laws designed to make parenting as safe as Britain’s roads. Various behaviours currently considered “all right” by the terminally stupid will become illegal. Such things as the following will become crimes subject to the full force of the law.
About the Author

Steve Cook is the veteran of three gruelling parenting campaigns and has now, after years of rehabilitation, pretty much recovered apart from the nightmares and an irrational fear of diapers.