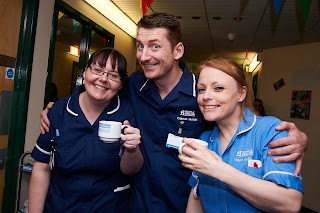 (Editor's note:  this article from2019 has been updated by its author to incorporate the latest discoveries regarding Covid19)

Researchers have discovered a revolutionary new therapy for stress, depression, government efforts to solve problems that didn't exist until it decided to solve them and similar forms of emotional or mental turbulence. Tests have shown it to be up to a hundred times more effective than psychiatric drugs, lobotomy or ECT.

The research was prompted by an earlier discovery that punching someone in the head is slightly better for curing mental disorders such as being a bit fed up, childhood and SDS (Symptom Deficiency Syndrome) than either ECT or lobotomy but considerably safer.

Efforts to replace ECT and lobotomy with head-punching and make it available on the NHS stalled last year due to difficulties finding enough people able to deliver a good punch without breaking their knuckles and when it was proposed to replace the human fist with a small rounders bat, the idea met with strong objections from various patients’ rights group who preferred patients’ heads to be attacked with scalpels or wired to the the mains and drew the line at pieces of wood.

The upshot of all that was that the race to find an alternative to psychiatry before the entire nation becomes incurably depressed took a new direction and a small amount of NHS funds were invested in another promising line of research, an old traditional British remedy known as ANCOT.

And when ANCOT was thoroughly studied and tested it emerged that a centuries-old panacea for almost every disturbance of the mind had for a hundred years been tragically overlooked due to the government’s inexplicable obsession with (a) drugging its citizenry, and (b) rewiring people’s brains until they stop working properly. It is now believed that this obsession came about when governments mistook psychiatrists for doctors and press releases for research documents.

As a result, ANCOT is to be introduced next year as part of a plan to make it available on the NHS where it will replace all psychiatric interventions.

Moreover, recent discoveries have shown ANCOT to have even broader benefits, being an excellent pick-me-up for people freaked out by Covid19, rushed to hospital with an outbreak of no symptoms or made poorly by a PCR test now known to spread the virus or even kill very old or dead people on occasion.
Under the full technical name of A Nice Cup of Tea, the new therapy is expected to save the NHS billions of pounds a year and cut crime, drug abuse, suicides, violence and murderous rampages by at least half by 2021.

While the change might well see the wipe-out of pharmaceutical companies, it is expected to provide a boost for other industries such as teapot manufacturers, although some fear the rise of sinister corporations such as the infamous Typhoo or PG Tips. Such corporate giants may well use their leverage on governments to have laws introduced making tea drinking compulsory in the UK. Contrary to a popular misconception, tea drinking in Britain is still, for the time being, voluntary, except on building sites.

A nice cup of tea will be available on prescription from your GP and hospital staff are to be retrained to make the offer of a nice cup of tea the first line of defence for patients admitted in various states of distress. It is believed by experts that in nine of out ten cases a nice cup of tea may well turn out to be all the treatment a patient will need.

Ambulance drivers too will be retrained and all ambulances equipped with a kettle and stock of tea bags so that ANCOT will be the preferred recourse for dealing with accident, heart attack and other trauma victims instead of the administration of sedatives.

Thus, for example, a relative who is rushed to hospital in a state of shock or hysteria after a car, plane or shopping trolley accident will be given a nice cup of tea, which will calm him or her right down, permitting medical staff to go about their business of sewing legs back on and so forth, which is much easier when the patient is mellow and not freaking out.

It is stressed, however, that a nice cup of tea can be mildly addictive and has physical side effects such as hyperactivity of the bladder.


ANCOT is not, researchers also warn, a substitute for proper medical treatment such as staunching the flow of blood, restarting the heart, setting bones etcetera – although it is believed that on many occasions it may be a viable alternative to CPR.

Thus, a patient rushed to hospital with six stab wounds to the face will not miraculously recover from his injuries after the administration of a nice cup of tea – although he will in most instances feel a lot chirpier about the whole thing.

Having said that, research is under way into another British traditional remedy that, coupled with telling the patient not to make such a fuss, may provide a highly cost-effective alternative to emergency surgery. The remedy is known as PIUCT (Put It Under the Cold Tap).

Readers should take note that street dealers such as British Rail have for some time been peddling a cheap substitute for the real treatment that comes in doses known as “bags” that are “cut” with various additives such as sawdust.

The police are researching possible applications of ANCOT to crowd control and gang violence. It is hoped that training officers to go around offering people a nice cup of tea may make our streets a lot safer. The Home Office this morning backed up that view – which is evidently gaining traction at the highest levels – with a Poot on Faceslab that, “If everyone would just sit down with a nice cup of tea and a Hobnob, everything will be lovely”.