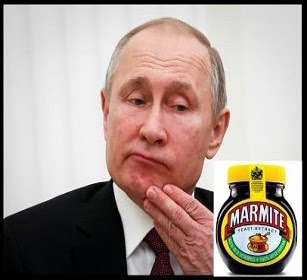 Tesco's recent refusal to stock Marmite has ignited a firestorm of fury that threatens to tear civilisation apart.

It started when Swiss company Unilever owned up to being Marmite's manufacturer and then made matters worse by trying to hike the price of the controversial substance, citing the falling pound making imports more expensive. This was despite the fact that Marmite is produced in Britain and only the Brits can be persuaded to eat it.

The falling pound is being blamed variously on (a) currency speculator George Soros, well known for his love of playing Risk with real countries or (b) Nigel Farage the arch fiend who masterminded the return to these shores of a half-forgotten form of extremism known as "Democracy", which resulted in Brexit, a calamity well known for not having actually happened yet and which is often cited as the single most influential event in history to throw the global economy and David Cameron into turmoil without having actually happened or (c) Vladimir Putin, renowned the world over for being guilty, in the opinion of the majority of the world's oligarchs, of not being dead

Responsibility for the shock of the Marmite scandal can therefore be placed squarely upon the shoulders of Soros, Farage or Putin. It has not escaped the notice of the ERIA (Egon Ronay Intelligence Agency - whose operatives are known as the "Michelin Men") that all three suspects are lovers of fine food. Investigations are in fact underway to verify suspicions that the three may have formed some kind of alliance and be acting in concert.

Be that as it may, Tesco was quick to respond to Unilever's attempt to capitalise on Britain's misfortunes and struck a blow for food lovers everywhere by refusing to stock the Brown Nectar.

Unilever immediately hit back by attempting to move its Marmite production to a factory in Provence. But this plan was shelved when the French rioted, incensed by what they saw as a British attempt to inflict upon their nation "le terrorisme alimentaire". Hordes of angry Frenchmen blockaded Marmite supply trucks at Calais, overturned British holidaymakers and set light to a symbolic mound of Marmite Butties in Rouen.

Meanwhile, in Britain in protest at the Unilever price hike, a Marmite boycott quickly gained popular support as million of Brits flocked to the cause of not buying, or eating Marmite. A "Boycott Marmite" Facebook page received one and a half million likes in the first hour of going on line and the new grass roots movement received floods of supportive messages from all over the world.

In Leamington Spa, the town's famous Marmite Emporium, the only shop in the world specialising in Marmite for obvious reasons, reported a sharp drop in business. Sales of popular items such as its famous Strawberry Marmite Spread, the innovative Marmite in White Wine and even Marmite-filled chocolate truffles all plummeted and the number of visitors dwindled to well below its peak of one a week during the recent Marmite Festival.

But things have now gone from bad to worse as the situation rapidly deteriorates. In its monthly intelligence report "Inflammatory Accusations Without Proof" the government announced to a stunned world that Vladimir Putin may be preparing to flood the Western hemisphere with a beetroot-based Marmite Substitute known as Marmov. Suspicions abound in newsrooms across the land that a secret factory, a factory so secret nobody can prove (or more importantly disprove) its existence, in Marmograd has gone into full-scale production to produce a million barrels of the new terror weapon in an effort to bring Western civilisation to its knees.

This latest instance of Russian aggression is thought to be even worse than the other instances of Russian aggression, such as helping to defeat the terror group ISIS, using its two foreign-based military bases to surround the whole world, recovering from Communism and not doing what America tells it to do.

Meanwhile the biological weapons and food manufacturer, Monsanto has pledged to fill the Marmite gap with a genetically modified Marmite of its own. The fact that in laboratory tests of the product rats developed alarming lumps and lost all sensation in their taste buds is not considered to be a problem and the new product has already been approved by the FDA so long as its labelling bears the legend "Probably Fairly Safe for Human Consumption".

Safety concerns are further alleviated by survey results that show consumers tend not to eat Marmite in any case. Most consumers buy a jar and then have it sit on a shelf for generations. Marmite keeps for decades as mould and bacteria cannot actually live on it.