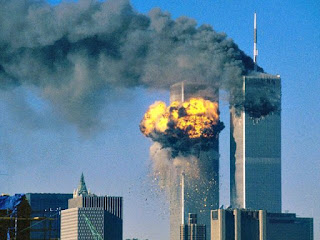 An investigation by FIB, the US government’s completely unbiased and trustworthy “Federal Investigation Branch (motto: “The truth and everything but the truth”) has uncovered shock new evidence that conclusively proves the real reasons for the collapse of the Twin Towers and the third World Trade Centre building on 9/11.

Released today, the FIB report (entitled, “What Really Happened on 9/11 and subtitled, “We are not even lying this time”) lays to rest all sensible theories about 9/11 – plus the government’s own conspiracy theory that hinged somewhat tenuously upon the notion that on 9/11 all the laws of physics were temporarily suspended.

By a real stroke of luck, the new explanation, about which it will soon be rendered by presidential edict completely illegal to argue the toss (even if it had any flaws about which the lunatic fringe such as voters and engineers could argue, which it doesn’t), completely gets the US government and its leading players (Bush, Cheney, Rice et al – the so-called Gang of Loons) right off the hook.

The FIB, during its two and a half days of painstakingly sifting through all the evidence that was not accidentally incinerated in a fire that broke out in Dick Cheney’s fireplace, examined the official version of the events on 9/11.

That version was based on a mountain of scientifically crafted press releases and evidence presented by highly qualified journalists with degrees in grammar and cookery. In the face of a veritable storm of common sense maliciously circulated by scientists, architects, engineers, pilots and thousands of such people not really qualified to have an opinion, the government’s version maintained that:

The most devastating and sophisticated attack on the US since Pearl Harbour or the introduction of income tax was masterminded by a slightly dim bloke with a beard from his hideout in a cave in nearby Afghanistan.

After examining all the evidence and receiving testimony from 21 000 architects, engineers, firemen and other unreliable witnesses, the “controlled demolition” theory was dismissed as being unpatriotic because it pointed the finger of suspicion at many people above suspicion, such as the CIA, Mossad, politicians and Dick Cheney.

The ease with which the buildings – purportedly designed specifically to survive having several large aircraft ram into them - collapsed was put down to the flimsy nature of their construction and the use of inferior steel that, unbeknownst, to anybody, was able to ignore the laws of physics and vaporise at just above the ignition temperature of cardboard.

The large passenger jet that slammed into the Pentagon and left a hole much smaller than itself also vaporised leaving no trace.

The traces of military-grade thermalite, the only substance other than a nuclear explosion known to be able to vaporise steel and melt concrete, that was found all over Ground Zero, got there when it accidentally fell off the back of a passing thermalite delivery van that had stopped in the underground car park so its driver could use the WTC WC.

This official account of events, described as completely plausible by such authorities as its authors, George Bush and at least a dozen other people the world over, can be found in the fiction section of the Library of Congress.

Hailed by many as the greatest spoof ever written, it has received less than rave reviews from some quarters and a great deal of raving from others.

Hailed by the Times Literary Supplement as the “stupidest farrago of abject nonsense in the history of the world”, it has been bedevilled by the fact that a small number of people have been unable to get their heads around the elaborate scientific explanations so patiently detailed in such reliable sources as the Washington Fibber and Armageddon Monitor. As a result, a small minority of sceptics comprising 1 in 3 Americans and 9 in 10 of the rest of the world have held the view that the American government might have been lying, which is really unfair when you think about it and it really hurt George Bush’s feelings.

Fortunately, the latest report is able to present at last a completely plausible and watertight explanation as to how the three WTC buildings were brought down so easily and how the Pentagon was hit by an invisible plane that left no trace. It is an explanation that should now end the debate once and for all.

To quote the report:


“It is now clear and controvertible that the tragedy of 9/11 was not brought about by an elaborately planned False Flag involving insiders and explosives experts, nor by a chance concatenation of physically impossible events as the evidence suggests. What has become abundantly and conclusively clear from the evidence is that what was at work on 9/11 was a hitherto unsuspected influence: magic.

The United States was the victim of an act of war perpetrated by wizards who hate America despite us never being anything but nice to everybody and not democratically bombing anyone who didn’t have it coming. They are believed to be Muslim and very close friends with Vladimir Putin as evinced by the fact that they might have had beards and are reported to have purchased tickets to the Bolshoi Ballet on line..”