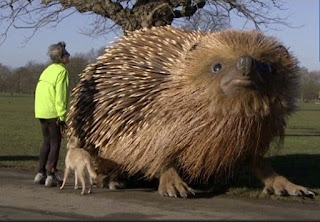 The world was treated yesterday to a rare sighting of the famous Giant Hedgehog, which wandered out of Ashdown Forest in search of food and made a brief appearance near Hartfield in East Sussex before vanishing back into the Forest again.

The creature, which can reach a height of ten feet at the shoulder and a weight of 30 tons when fully grown is, sadly, feared to be facing extinction, with less than a hundred surviving in the wild. It was named recently by Extinction Rebellion as one of the three hundred million species murdered by the human penchant for having the central heating running full blast, not being vegan enough and driving to environmental protests in gas-guzzling automobiles.
This is as far cry from its heyday just after the last Ice Age when vast herds of Giant Hedgehogs roamed northern Europe and North America eating their way through entire forests overnight. Its marauding herds are now believed to have engendered an early form of deforestation that gave rise to the North American Plains and the Lincolnshire Fens.

In recent centuries though, its numbers have declined markedly until it has all but disappeared, with just a few of the species remaining on the British mainland.

Yet fossil records and the folklore of ancient Celtic and native American tribes (the so-called "Hedgehog People") tell us that the beast once numbered in the millions and comprised a pillar of ancient tribal economic life: its organs were used for food, its hide for making hats and its spines for making lots of sharp pointy things.

Indeed, so important was the Giant Hedgehog to the economic life of northern peoples who traded their produce with more sophisticated cultures to the South, sharp pointy things have been found in the tombs of pharaohs and one of Plato's hats, recently analysed by the British Museum, is now known to have been made of hedgehog. In some parts of Scotland, however, the hedgehog's hide is to this day used to make sporrans - although Scottish law now requires the spikes to be removed for humanitarian reasons.

The Giant Hedgehog culinary tradition has also survived to the present day, with hedgehog spleen being a vital secret ingredient of the French dish, Ratatouille and Hedgehog Goulash still a delicacy in Budapest.

The sharp decline in its numbers began with the arrival in North America of the white man and his love of killing everything in sight aided by new ballistic hunting weapons such as the Hedgehog Bazooka and in Northern Europe by loss of its habitat due to the deforestation occasioned by the invention of crazy paving and supermarket car parks.

Today, almost forgotten, it remains but a footnote in British folklore: for example the Monty Python tale of the Piranha Brothers and the American legend, "Conan the Hedgehog Slayer", whilst the once-popular blood sport of hedgehog wrestling survives only in Omsk.

So thoroughly has this magnificent, yet at the same time immensely uninteresting, creature been forgotten that even its appearance in Sussex did not inspire a single newspaper mention . . . except here in the Daily Scare of course.

Extinction Rebellion campaigners have blamed the demise of the Giant Hedgehog on climate change, pointing out that the climate has never changed before so its suddenly changing a bit caught everybody off guard - not least the Giant Hedgehog that was so busy rummaging, snuffling, foraging and so forth it did not see it coming at all and so decided to become extinct.

An ER spokesperson told us that the government must immediately,

a) stop the climate changing by passing legislation to make it illegal and (b) stop the Giant Hedgehog from becoming extinct.

But speaking for the government, the Prime Minster responded,


"If the Giant hedgehog has decided to be extinct, there's not much we can do change its mind and it does have the inalienable right to become extinct if it wants to. The best we can do to help is introduce as Giant Hedgehog Extinction Tax."

He did, however, promise that if his party wins the upcoming election, they will bring climate change to a halt immediately.