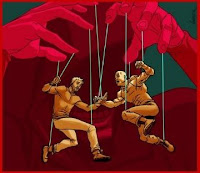 Featuring state-of-the-art puppets so life-like they are occasionally mistaken for real people, the current episode comprises an anarchic mix of the slapstick and the surreal.

Characters such as the manic, mop-haired "Boris" and the bearded "Jeremy" knock each other about in amusing ways, pretend to know how to run a country, feign sincerity, accuse each other of lying, ineptitude or skulduggery, explain things in ways that make no real sense, promise to skillfully steer the country into the ground in statesmanlike ways and, with varying degrees of success, try to convince the bemused audience they are not stupid.

The audience, mainly on the grounds that there is not much else going on, become enthralled and, forgetting they are watching pure theatre, treat the characters as if they are real people with wills of their own. Oblivious to the strings that make the characters dance in occasionally convincing ways, they take one or other of the protagonists to their hearts, cheering on his (or her, for this is an equal-opportunities theatre) every inane utterance as if it is actually sensible and greet every utterance his (or her) antagonist with, admittedly deserved, howls of derision or the occasional hurled invective.

The entertainment value of Democracy cannot be underestimated in so far as it provides an engaging distraction in which people who are vaguely aware that there is something going on are relieved of the burden of ever knowing what it is exactly.

The show has been such a success that whilst the nationwide audience's attention if fixated on the theatrics, the clever ventriloquy and skillful puppetry of the puppet master, Mr Oligarch, is forgotten and never receives the attention it deserves.