The nation appalled (but also terrified so going along with it) 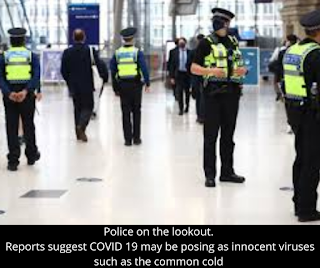 The Prime Minister, speaking last night to a masked nation, from his luxury anti-virus bunker on an Earth-like planet, has revealed that the so-called COVID Terror may be more terrifying than first thought!

As it was first thought to be pretty terrifying thanks to conclusions reached by government press release writers and other scientists in advance of evidence and other mere formalities, that means it it is pretty darn terrifying indeed!

In fact, the Terror is now so great that it has sent shock waves throughout the Tory Party (Sid and Hermione Loon of Reigate) and other hotbeds of  credulity.

And it has prompted the Prime Minister to follow the very best secret scientific advice that is so secret 99% of known scientists know nothing about it and announce a 3-tier COVID Terror Alert system, as follows:

Level One: known as ABA (A Bit Anxious). When a Level One alert is announced, people are required to undertake customary precautions to ward off invisible lurking menaces, such as believe everything they are told by the government, not to breathe (or sneeze) on one another and avoid touching walls (or skirting boards) wherever possible. Everyone is legally required to voluntarily frown at people in supermarkets not wearing their masks properly and/or suffocating. Citizens are ordered to refrain from getting ill as the NHS is shut.]

Level Two: LB (Loose Bladder). Windows must be kept firmly shut to stop the virus getting in, with stiff fines for anyone leaving one open. Citizens should avoid touching the floors. People are urged to dive under passing traffic to avoid sharing the same sidewalk. The new, friendly COVID Marshals, set up last week using funds diverted from the now redundant NHS, will helpfully beat up anyone not carrying a  box of tissues.

Level Three: BT (Brown Trouser)When a BT alert is declared, people MUST voluntarily stay indoors. Cowering is advised. Complete motionlessness is recommended so the government has ordered everyone to stop fidgeting. If you stay very quiet the virus may not notice you and go bother someone else, such as the French.] Violation of these voluntary guidelines will oblige miscreant, anti social and somewhat mentally ill perpetrators of such a crime to voluntarily choose between a £10,000 fine or 12 years in prison.

Accordingly, Alerts have been declared across our stricken and dutifully terrified nation as follows:

Level Two: across much of the North and other frontier areas.

The criteria for declaring the Alerts are Top Secret and will probably remain so until scientists figure out what they are.

It is however believed scientifically by scientists following science or other abstruse mysteries too brainy for thickos to understand, that poor people are much more prone to the virus, whilst Tory supporters and other members of the Chosen Caste have a natural immunity bestowed upon them by God, who as you know, voted for Commissar Boris at the last Armageddon.