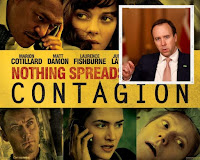 by Steve Cook
Researchers may have discovered the answer as to why many Brits are suffering from what psychiatrists are calling "Disney Syndrome", which is the sensation that reality has been replaced by a badly stitched together, implausible movie script.
The answer came recently in the form of recent shock revelations that shockingly revealed the recent shock news that the movie "Contagion" inspired the government's rollout of what is now known as the "Covid Terror", at one time believed to have been similar to an actual pandemic.
Whilst government policy appeared to many to have been influenced by such British Comedy classics as "Carry on up yer Virus" and Monty Python's "Life of Boris", it now appears that the true influence was the much more serious "Contagion", a movie with fewer laughs than . .  .well, a deadly virus outbreak.
This closely guarded secret was, as you know, let slip by Matt Hancock whilst entertaining a live TV audience with a hilarious impression of a government Minister during his acceptance speech at the recent "Fibber of the Year" Awards.
It completely scuppered the PM's assertion that the government is being guided by a mysterious anonymous cult known as "The Secret Order of Lucifer the Scientist" a group that pays homage to such great luciferian scientific advances as the atom bomb, napalm, thalidomide, ECT and biological weapons.
Yet, as the PM was quick to point out the movie Contagion is in fact fairly sciency, although most of its science is made up, which is just one of its advantages.
We can further reveal that the pursuant mass injection of millions of innocent bystanders with experimental "doomsday" chemicals in an effort to reach the much sought after "herd mentality", was also inspired by another Hollywood blockbuster, the 2007 classic "I am Legend" starring Will Smith.
But even though that's more than enough shock revelations for one day, we can further reveal further shock revelations that will have you reeling with . . . er, shock.
While it was widely believed by the citizenry and other conspiracy theorists that the government, having lost the capacity for rational thought during the War on Common Sense, was allowing globalist psychopaths to do its thinking for it, we can now reveal that this is not the case. The government is in fact taking all its instructions from the entertainment industry despite its attempts to appear stupid by its own efforts alone.
This has provoked a further mystery as to why, if that is the case, nothing it does is at all entertaining. But as Hatt Mancock of the Ministry for hysteria explained during a break from filming "The Muppet Coup",,
". . . the cat is now well and truly out of the bag regarding the "Hollywood Coup" so we can reveal that the government has phased in the use of various "cinematic aids" as part of our huge economy drive to save wasting taxpayers' money on anything sensible."
Included in this new initiative are the following to replace outmoded training and education procedures:
Training of Military Personnel: the traditional methods of shouting, shooting guns and so forth are to be replaced by the requirement that trainees watch Saving Private Ryan and then sit a written multiple-choice test.
Training of Surgeons: trainees to watch the full first season of Scrubs before being let loose on live patients (NHS).
Training of Police Officers: trainees to sit through twenty randomly selected episodes of the Netflix crime drama "Line of Duty".
Driving Licences: pointless driving tests have been scrapped by the Ministry of Transport. Licences will now be issued by the DVLA after the applicant has watched videos of four events from the previous year's World Rally Championship - however, many have objected to this on the grounds that it breaks with the long tradition of the government relying on pure fiction.
Training of Airline Pilots: must watch Top Gun whilst sitting in a flight simulator
Government ministers: to qualify must have watched all four episodes of Secret State starring Gabriel Byrne.
The Church of England has now taken a leaf out of the government's book by requiring its ecclesiastical trainees to watch The Exorcist.
________________________________________________