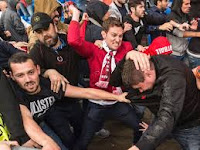 Violence flaresd at the World Cup today when England fans became embroiled in a mass brawl with England fans.

The trouble was provoked by FIFA's earlier warning that England fans could be punished if they indulged in any pro-Brexit, anti-EU chanting.

This, predictably, guaranteed that England fans would take the warning to heart, pull out all the stops, exercise their human right to taunt whomsoever they please, especially foreigners and spend the entire ninety minutes of today's match gleefully chanting anti-Eu, pro-Brexit sentiments at the tops of their voices.


In fact, before the match had even kicked off, a chant was reverberating sonorously around the stadium to the effect of:

After a quarter of an hour or so, this was replaced by:

"Out! Out! Out! we're getting out!
We're scarpering, we're legging it!
Come on Teresa May,
Stop buggering about!"

Thus far, things had remained relatively good-natured, with the FIFA thought police in the crowd evidently having decided to turn a deaf ear to this direct challenge to their authority, mainly because no-one had the slightest idea how they were going to make good on their threat to punish any errant chanters.

But things turned ugly when the soft-Brexit contingent among the England fans started up their own chat, to wit:

"We're all in favour of leaving but not right away!
Were really not in a hurry,
We gotta act responsibly,
FYI Teresa May!"

This hurt the feelings of the hard-Brexiters considerably and large numbers were offended judging by their inpromptu posts on Facebook.

Bemused fans, officials TV pundits and viewers from the world's other, less raucous, nations witnessed the spectacle of the hard Brexit and soft Brexit factions among the England fans chanting against one another, the Common Enemy (foreigners) momentarily forgotten.

This went on for quite some time. Even a small hard-core of Remainers joined in with their own chant of:

"We never wanted out in the first place!
You're a load of racists twats!
Brexit stole out future
And we effing want it back!"

Eventually tempers began to fray and the hard Brexiters further taunted the soft Brexiters with "What a load of poofters!" and when someone wrapped an effigy of Boris Johnson in bog roll and set light to it, fists and boots started to fly.

A three-way riot ensued and order was eventually restored when the Russian riot police arrived armed with English-speaking negotiators who reminded the combatants that the whole thing was the fault of the Muslims anyway.