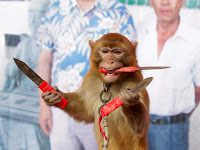 Ninjapet Defenders Ltd (NDI), a company at the cutting edge of home security, today expressed its pride and pleasure at the recent performance of Malcolm the Monkey, one of its top-of-the-range, state-of-the-art of products,

NDI supplies pets highly trained in various martial skills so as to present a deadly but at the same time cute and cuddly added security for your home or office, especially in fighting off and/or mutilating and/or |(preferably) killing unwelcome intruders such as burglars, bailiffs, and so forth. At the same time it provides household pets with improved career opportunities and the opportunity to earn their keep instead of sitting around all day eating and leaving stains on the carpet.

A case in point is Malcolm, a monkey highly trained in the skills of knife-throwing. Last Monday night he skilfully and with deadly precision dismembered a burglar who had broken into a home in Shrewsbury armed only with a set of Indonesian antique throwing knives (the monkey that is, not the burglar) and is now being hailed a hero. Some have criticised the ferocity with which Malcolm took out the intruder and then threw his head at passing cars but it is believed he must have mistaken the burglar for a political canvasser.

Ninjapets provide a comprehensive range of trained pets or, if you prefer, train your existing pet (except goldfish) into becoming deadly killing machines in only three weeks of full-time training.

Such pets include:
Ninjapets meanwhile are working on further refinements and top-of-the-range super-pets such as Clive the fruit bat who will not only take out an intruder with poison-tipped darts but then proceed to hunt down and eliminate his entire family,

Related News:
Missing Minnesota paperboy David Weaver is still . . . er, missing, three weeks after last being seen being chased through the streets of Minneapolis by a machete-wielding ttortoise.. . .