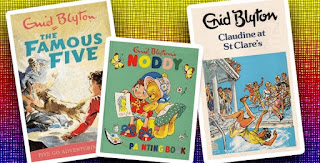 Hopes rise that libraries across the nation will strike similar blows for freedom and tolerance  as children everywhere deeply offended.
by Steve Cook

Enid Mary Blyton, born in London in 1897 but, sadly, feared dead since 1968, was an English children's writer and the seventh best selling fiction author of all time. Her books have sold more than 600 million copies worldwide. She is best remembered for her Noddy, Famous Five, and Secret Seven series.


However, a library in Neasden has today removed all her books from their shelves and adopted a policy of revoking the library membership of anyone who asks for them. It is hoped that libraries across the nation will follow their example and strike similar blows for freedom and tolerance.


The branch librarian explained the reasons for the move, pointing out that throughout Blyton's many works the lesbian, gay and transgender communities are under-represented.

"Not one of the Famous Five, The Secret Seven nor the entire population of Toyland is gay, transgender or even bisexual." she said. "This is a statistical improbability that underlies the deeply-rooted homophobia of her works."

Blyton's work is similarly racist in tone. Missing from all of her stories is any representation of the Asian, Afro-Caribbean or Ethnic Albanian communities.


Blyton was an incorrigible heterosexual who throughout her entire career completely neglected to stand up for gay rights or even address the issue in any of her stories, a failing now regarded as offensive to children everywhere . . .