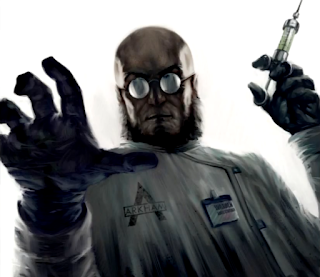 The psychiatric industry is today celebrating the release of it latest mental illness.

Known as PND, it is confidently expected by its inventors to smash previous records set by popular fictions such as ADHD, which grossed over a bazillion dollars in pharmaceutical sales and brought the benefits of the fashionable Chemical Straightjacket to millions of children, enabling them to grow into fully dysfunctional adults by the age of 32.


ADHD is known within the pharmaceutical industry by the affectionate nickname "The Gravy Train Syndrome". It had everybody convinced it was real and that the nation's children all had a brain defect, until its inventor, Dr Wantme Hedexamind of the Brain-U-Like Institute, admitted on his deathbed that it had all been a figment of his imagination.

Be all that as it may, his confession sparked a feverish hunt for a new illness to replace ADHD before the expected loss of revenue cost the psycho-pharmacy a packet.

The problem came at a difficult time for the industry as it had virtually run out of nuances of human behaviour to label as being symptomatic of being bonkers. Almost all aspects of human behaviour, from childhood, to bad spelling or a preference for organic food to not liking psychiatry very much, had already been labelled.

Psychiatry was in the grip of a virulent strain of SMID (Shortage of Made-up Mental Illnesses Disorder) and for a while a psycho-pharmaceutical catastrophe loomed, threatening a very bleak future for the industry of not being able to make money from selling people drugs they don't need. As any drug dealer can tell you this can often lead the victim into having to do something useful for a living or even not kill anybody.

But in the nick of time, the Brain-U-Like Institute came to the rescue. After several intense minutes of research in which the brains of dead monkeys and live rats were carelessly examined in the institute's press department, PND was launched upon a world that became clinically depressed soon thereafter.

PND stands for Prenatal Depression and is an affliction that strikes millions of fetuses each year worldwide, between the ages of 0 and 9 months.

Its primary cause is thought to be being cooped up in a confined dark space for weeks on end without access to Facebook.

Symptoms of the disorder include:


Fortunately and by a remarkable stroke of luck, the pharmaceutical industry had only a week earlier developed a drug it couldn't find a use for but which, by an equally incredible coincidence (what are the odds?) just happens to be useful for the management of PND.

Like all of pyschiatry's 347 000 disorders listed in its diagnostic manual (available from the Fiction section of your local library) PND cannot be cured. The disease however can be managed (anesthetized or bludgeoned so as to helpfully damage the nervous system sufficiently to numb the patient) using the drug.

Called Fetaddict, this miracle drug operates on principles similar to other miracle drugs such as cocaine or heroin and renders the fetus as high as a kite for long periods.

At birth, PND of course ceases to be a problem and other drugs are waiting the wings to treat the newborn for Fetaddict dependency and the inevitable symptoms that result from suddenly stopping taking the drug (aggression, homicidal rampages, depression etc).

Fetaddict will be available on the National Health from February and will only cost the NHS less than a billion pounds a year. This is an amount it will easily be able to afford if it cuts out non-essential services such as ambulances and operations.