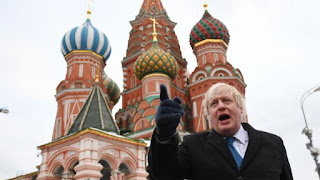 Former British Foreign Secretary, Boris Johnson, whose tenure was marked by a determination to whip up a confrontation with Vladimir Putin in the best traditions of Anglo-American diplomacy, today revealed the real reasons for his resignation.


His quitting as Foreign Secretary was ostensibly prompted by Teresa May's policies over Brexit but today the real reason became clear when Johnson admitted he had in fact resigned out of embarrassment because his name sounded too Russian.

It had made things very awkward for Boris, a man who staked his reputation as a diplomat on a dedicated Russophobia and raised suspicions that he, like Trump, was working for Russia all along and that Russia has been, in ways as yet not clear, interfering with Brexit and other aspects of traditional government mismanagement.

It is well known that Russian interference is responsible for major cock-ups on both sides of the Atlantic and none are the responsibility of the idiots actually involved - a fact proven true by being mentioned in a newspaper.

Johnson, who has hopes of one day becoming Prime Minister and annoying Russia - and everybody else for that matter - from an even higher echelon, has started proceedings to change his name by deed poll.

His aim was to change his forename to Donald but thanks a a bureaucratic a mix-up, his surname was accidentally changed to Yeltsin, causing further embarrassment . . .