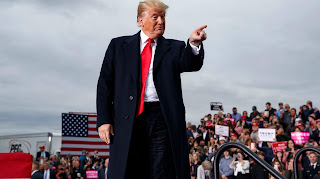 The whole world was left reeling in shock yesterday when the US President, Donald Trump, unleashed the startling and unexpected discovery that, contrary to commonly-held credulousness, the media doesn't tell the truth.

In the same breath he in fact subjected the world to a double-whammy in so far as his statement marked the first time a politician, since Genghis Khan ("I'm gonna kill everybody") told the truth.


Trump tried to claim the new discovery as his own and his supporters, who described his speech as the most awesome political speech in the entire history of the world, were quick to hail the pure genius of a man able to identity a deeply rooted problem no-one in the ... um, history of the world ever suspected until now.

Sceptics were slower to heap praise, claiming that Trump was merely stating the blindingly obvious that millions have been well aware of since the invention of semaphore. Trump countered the accusation that millions already knew this and tens of thousands have stated it over and over again for decades with, "It may well have, allegedly, been known before but until now never by anyone really important."

He then added that stating it out loud never got anyone elected President before either.

Yet many others were totally unaware that the media make all sorts of things up or alter things to suit the agenda of their owners. The organisation Born Yesterday Democrats (BYD) for instance issued a statement saying they have complete faith in the media never to lie about or alter anything and to remain as they always have been, completely unbiased, fair and factual, especially when slagging off Donald Trump or trying to get Hillary Clinton elected, which is only fair when you think about it.

Their statement concluded with a call for Trump to be impeached because criticism of the corporate media, which is beyond reproach (well, at least criticism), for lying is "Fascism pure and simple - only in a free, democratic society can we enjoy the ideal scenario of nobody saying anything bad about the press."

A spokesperson for BYD's lawyers, Hook, Line and Simpleton told the press, "Trump's coming out with wild claims that the media lies proves beyond reasonable thought the cynicism of a man who is willing to get himself elected by saying what millions of people can see with their own eyes! He more or less - well, more actually - told the press to its face that it is run by lying scum. He doesn't care whose feelings he hurt."

The press dutifully and meticulously noted down the spokesperson's every word and faithfully reiterated it on the Evening News as, "Trump is a Maniac and Should be Immediately Shot say Born Yesterday Democrats."

Speaking for corporate media moguls across the civilised world and America, the Australian mogul Pupert Burdoch said, "Clearly the arch-fiend in the White House has not grasped that freedom of the press means what it says. A free press must remain free to lie through its teeth in the time-honoured democratic tradition because if you are not free to lie, if you allow the petty rules inflicted on you by extremists that inhibit your inalienable right to fib, then you are not truly free. If you are against the right of the media to liberate itself from the straight-jacket of truth, then you are obviously anti-media and a totalitarian despot."

Trump meanwhile was giving a talk to the The National Flamethrower and Machine Guns for Peace Association, entitled "Pointed Sticks are Much Worse than Guns", in which he claimed the pointed stick epidemic in Britain has left the country's streets running with "rivers of blood" and millions dead.

Pot and Kettle Call Each Other Black in New Hypocrisy Outbreak . . .