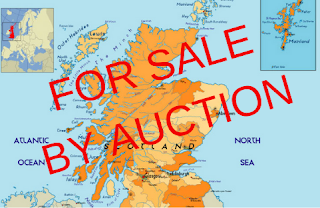 by Steve Cook, our man is arrears.

News is just coming in that US President Donald Trump and UK Prime Minister Boris Johnson are holding secrets talks to thrash out a deal by which the USA will buy Scotland from England for a sum rumoured to be “in excess of ” ten billion dollars.

This comes in the wake of Trump’s failed bid to buy Greenland from Denmark.


Trump explained yesterday that, “Scotland may not have quite the mineral resources of Greenland but it does have offshore oil fields, wild sporrans and the famed haggis whose herds roam the Highlands just itching to be turned into burgers. It’s one of my all-time favourite countries, so much so that I haven’t even gotten around to insulting it yet. So, all in all, I figured it is worth a punt as you Brits say. Besides, my advisers have been working hard to do a cost-effectiveness analysis country-acquisition-wise and they tell me that buying a country is in fact a whole lot cheaper than invading it.”

When asked about the proposed deal, Johnson told this reporter: “America’s offer is very tempting and the UK could certainly do with the money – well, England anyway – and with Scottish Independence from Westminster on the cards, we thought it prudent to act now whilst Scotland is still ours to sell…”

When I asked the PM whether the Scottish people should perhaps be consulted first, Johnson told me that he didn’t think the Scots would mind as they are “not big on independence anyway”.

He went on to explain that whilst the Scots were, like the English, understandably sick and tired of being ruled from London, rather than seek real independence they are quite happy to be ruled from Brussels, which is sort of swapping being a vassal of a defunct empire for being the vassal of a modern centralised superstate. “As one corrupt, authoritarian superstate (or empire) is very much like another,” the PM said, “it would not make much difference being ruled from Washington instead of Brussels. Besides, the bankers pulling the puppet strings of all three are the same people in any case.”

When I put the same question to Trump, he first accused me of being “a commie”, then reminded me that buying countries is not unprecedented in history. In 1917, and the US bought the Virgin Islands off Denmark for $25 million. The US bought Alaska off Russia in 1867 for $7.2 million, bought most of the middle of the continental US from France for $15 million in 1803 with the Louisiana Purchase, and bought Tucson, Arizona, and some surrounding areas off Mexico in 1854 for $10 million.

Nobody ever bothered to ask the indigenous people about it and France for example essentially sold vast swathes of land it had stolen from the indigenous natives.

I pointed out that deals such as the Louisiana Purchase essentially place the USA in the position of receiving stolen goods, which is a criminal act and before I could go further, I was accused of being a Commie again.

Anyway, in the true tradition of governments and other criminal organisations everywhere, the sale of Scotland to the USA may well go ahead and England might make a few bob, which its government can then fritter away paying off a tiny slice of the money it owes to the banking cartels.

Another proposal, from Russia, that is attracting a lot of interest is that Scotland be put up for auction and sold to the highest bidder. In such a scenario, the USA will have to out-bid other parties showing a strong interest, such as England, France and Russia.

It should be noted, however, that with the exception of Russia, the other bidders do not actually have any money as they are in fact bankrupt and owe the banks more money than exists.

Trump, whose own country is trillions of dollars in debt, a sum that far exceeds all the dollars in existence, was not the slightest phased by the fact that his country does not have any money. He explained that the USA will ask the banks to create some more money, “which they can do in, like, thirty seconds, by poking some computer keys or something”.

The USA will then borrow it off them and leave future generations of impoverished Americans to pay the loans back long after he is dead.

Should America default on the loan, Scotland will of course be held as collateral and in the event of a default, the banks will assume ownership of it.

But, as a senior banker explained, “If you understood the history of modern banking you’d know that, worldwide, all that has pretty much happened already.”