English language to be scrapped

"Too sexist," say experts at the Brain-U-Like Institute. 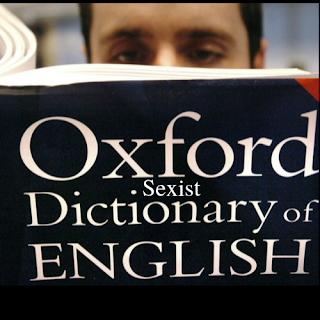 The discovery by psychiatrists of a new mental illness has prompted calls for the entire English language to be scrapped or at least considerably revised on account of it being too sexist.

Researchers at the Brain -U-Like Institute in London recently discovered that the unabashed sexism of many English words has caused millions of people the world over to be deeply offended and suffer from a depression-like illness known as Politically Incorrect Stress Disorder (PISD). The illness particularly strikes people with nothing else to worry about.

“the problem reared its head a few years ago when scientists discovered that words ending in “man” were inherently sexist and could cause people to become unhinged. Such words as fireman, milkman, chairman and so forth were accordingly changed to fireperson, milkperson, chairperson etcetera so as to spare millions of people the agony that such evil gives rise to.”

Unfortunately, those early efforts not to offend anybody, especially millions of people who were unaware that they had been offended, backfired with the discovery that “person” ends in “son”, which means “male child” and is therefore just as bad as words ending in “man”.

Therefore, teams of linguists are now working on revising all words ending in “son” so that they end in the gender-neutral “offspring”.

But it was then discovered that thousands of words begin with “man” which is equally evil and it was then also discovered that even more words end in "man" than was at first realised, such as woman, human etc and “man” is to be replaced with “peroffspring”

Once the revisions of the language have been completed, all citizens of the English speaking world (Buckingham Palace) will be required by law to learn all the new words and will be subject to a written test and the new language will become mandatory (peroffsporingdatory).

Failure to speak the new language fluently will from 2025 not be accepted for any reaoffspring, with offenders facing up to three years in prioffspring.

Related News
Lingiuists will also be phasing out "ham" at the ends of words as it is offensive to vegans. It will be replaced with "carrot". So Brimingham will become Birmingcarrot, sham will become scarrot, gingham changes to gingcarrot and so on ad nauseam. Buckingham Palace (see above) will be renamed Buckingcarrot Palace.