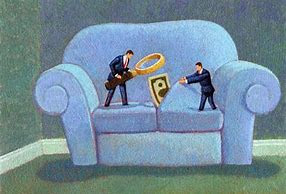 by Steve Cook and Liam Cook

It has been alleged by troublemakers determined to undermine the highly popular status quo of nobody knowing what is really going on that recessions are caused by a shortage of circulating money - a relative scarcity of spending power.

The shortage of spending power, they also maliciously allege, prompts people business and governments to borrow lots of money to compensate for it.

Some have argued that the way to handle the problem is to print more money and get it into circulation. However, this method has been roundly condemned by politicians, journalists, money lenders and other economic experts as,


"Dangerously simple and easy to understand and liable to undermine complexity to such a degree that government will be threatened." Government spokesperson.


"Communism pure and simple and just the sort of thing that Genghis Khan or Hitler would have done." A Prime Minister (name withheld for security reasons).

It has long been argued by the banking industry that the second, preferred method of,

"Having the government print money and circulate it is a recipe for disaster and that the really sensible way of doing things is to have banks print money and lend it out at high rates of interest instead." [Nathan Oligarch, from his book, "Nothing is More Sensible than Fleecing the Proles"]

The inescapable reality is that if the first method were used by sensible people and other criminals, this would deprive millions of needy bankers of easy profits.

Sure enough, it is well known that the second method, used across the world for over a hundred years has produced nothing but stability without any form of war, recession or austerity or economic travail whatsoever.

Indeed, when the bankers first persuaded governments to adopt their method they promised that "nothing can possible go wrong" and so it has been, with nothing going wrong at all apart from the occasional depression, recession, war, collapse, downturn and debt epidemic no more that every year or so.

As one banker pointed out, "These blips are a small price to pay for the Promised Land of universal debt slavery and everybody knows you can't scramble an omelette without breaking eggs."

So there is, when you think about it, no reason to change anything or look for ways to do things better because the current economic model could not possibly be improved on at all and is probably the most perfect system in the history of the universe.

So what, then, is causing economies to experience money shortages if it isn't the failure to supply the economy with an adequate stock of circulating money?

A task force recently . . . er, tasked by the government with finding an answer that isn't completely stupid has made a not-at-all-stupid discovery that may well solve the problem once and for all.

Extensive research has revealed that money to the tune of bazillions of pounds annually is disappearing into a black hole now identified as the backs of people's sofas the length and breadth of the land. The phenomenon is known to economists as the Pounds In the Sofa Syndrome (PISS). Consequently a new agency has been formed to investigate and resolve this national threat, the Pounds in the Sofa Syndrome Eradication Department (PISSED).

A random sampling of sofas carried out during dawn raids by armed PISSED agents revealed that,
It has been estimated from this random armed sampling that there may be enough to pay off the entire national debt lying dormant in the nation's comfy furniture.

The government therefore has increased the powers of PISSED to form up a national task force that will visit every house in the country and dismantle its sofas, extract the the money and recycle it into the purchase of a nice fleet of environmentally-friendly nuclear submarines or compensatory payments to the banking industry for loss of revenue.

Not to be outdone, the Labour Party has responded with an even more ambitious plan of its own and has pledged, should a miracle occur at some point and it gets elected, that it will extend the task force's powers to include armchairs in a second wave of helpful raids that the general public will almost certainly be very happy about.

A Labour spokesperson has claimed that the nation's armchairs may well be concealing as much spending power as "all the money hidden in the offshore accounts of the nation's corporate Mafia".