Your Brain Should be a Lot Smaller, say Psychiatrists 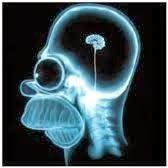 Researchers at the Josef Mengele Brain-U-Like Institute in Masskillin near Dunhelpin, Scotland, have announced today the discovery that the human brain is too big and unwieldy to be entirely practical.

The shock announcement marks the culmination of a thirty-year research project involving millions of citizens and other guinea pigs in which volunteers were administered doses of psychotropic medications over long periods in order to find out how small the brain could be shrunk before subjects lost the ability to chew.

The study is known as a triple-blind study because the procedure involves:

Results from the experiment shocked the researchers who had “never suspected in a million years” that interfering with the brain by entering foreign substances into would have any detrimental effect whatsoever.

"We just didn't see that one coming," said one expert.

Researchers are reportedly jubilant over a number of positive indications for the drugs that emerged from the trials. They proved to be quite effective, for instance, in considerably reducing cognitive ability, acuity, connection with reality, inquisitiveness, initiative, speech, dislike of psychiatrists and other symptoms of mental illness, as well as the notorious Childishness Disorder suffered by many children and B-List celebrities. However, the tendency of such medications to shrink the brain in 11 out of 10 people was completely unexpected even though everybody outside of psychiatry had known about it since 1842.

Research shows that the miraculous brain-shrinking properties of psychiatric drugs had in fact been finally proven in 1974. However, psychiatrists and drug manufacturers decided at the time not to mention this breakthrough to anybody for fear of worrying people and bringing on the symptoms of FBDD (Fear of Brain Damage Disorder) or its more serious cousin FODD (Fear of Death Disorder).

In the ensuing years, research continued apace with the study of hundreds of millions of brains donated by voters, using invisible nano-bots equipped with the latest thermal imaging cameras that were inserted discreetly into the bloodstream during routine operations such as appendectomies and lobotomies. It was this research that finally established that the brain could be shrunk to the size of a walnut before the subject lost the control of his (or her – for these were equal-opportunity experiments) bowels. Further shrinkage – up to ten percent – could be comfortably managed before the subject lost his (or her) contact with reality or the ability to swallow.

Yet even with the brain reduced to the size of a plum stone it was noticed that none of the subjects lost any really important faculties such as the ability to reach into their wallets, watch TV, vote Labour (or Conservative) or believe everything they are told by the media.

Psychiatrists admit that at first they were concerned that people might be a bit unhappy about a ninety percent loss of brain tissue but were heartened by several indications that there might be a silver lining to their cloud, namely:

Imagine their relief, then, at the incredible discovery that the brain had evolved over millions of years into being much too big in any case and shrinking it is actually quite beneficial in that it tends to correct a serious design flaw.

Even more research involving the dedicated doctoring of millions of pages of scientific data and combing through back issues of Hello Magazine finally revealed what had been staring scientists in the face for years:
Psychiatrists are now confident that smaller brains will help people by:
But while the full implications are further studied, some detractors argue that the brain shrinkage phenomenon may necessitate a precautionary halt to injecting fetuses with antidepressants to treat prenatal depression.

However, others fear that such over-caution may result in a needless loss of billions of dollars of revenues for the manufacturers.