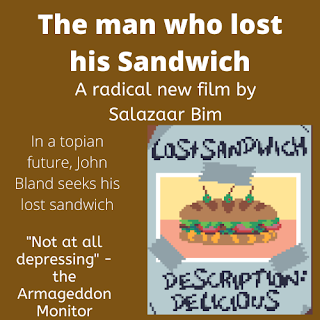 His works depict various visions of a dystopian future in which just about everything that could possibly go wrong has gone wrong and has become something nobody in their right mind would want to live in.

They attract huge audiences, which he artfully and creatively divests of any last grains of optimism whatsoever and, indeed, the will to live - as well as boosting the sale of antidepressants. This has made him an immensely popular artist among directors and shareholders of the pharmaceutical industry.

It has been said that the epidemic of depression and suicides so often blamed on a mysterious derangement of brain chemistry that has spontaneously occurred for no apparent reason may in fact be the result of millions of people watching his films. This, of course, has also made him very rich whilst psychiatrists have warned addicts not to withdraw cold-turkey from watching his movies but just keep taking their antidepressants instead. 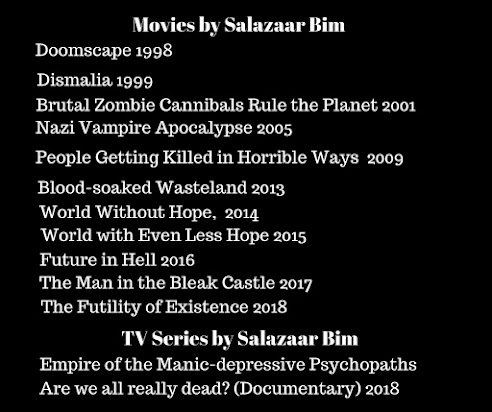 His movies, cleverly depicting dystopian futures in a variety of imaginative ways, include such classics as
Brutal Zombie Cannibals Rule the Planet,
People getting Killed in Horrible Ways (parts I, II and III), Blood-soaked Wastelands of Tomorrow
and the award-winning World Without Hope,
not to mention the ever-popular TV series, Empire of the Manic-depressive Psychopaths.

But Bim (23), evidently, feels he has achieved all there is to achieve in the "dystopian future" genre, is seeking to expand his repertoire and to venture into new genres - indeed to invent a new genre of his own.


He explained, "Somewhere along the line I lost my angst, that borderline mental illness that drove my creativity in its relentless downward spiral. I suddenly realised that endlessly portraying dystopian futures was all fine and dandy - I was proud of my contribution to the culture - but I had become, quite frankly, a bit bored with it all. And then one day, during the making of "The Futility of Existence" - a story in which a slightly unpleasant space ship crew on a ship with really inadequate internal lighting get eaten by a mutant flu virus - in 2018, I realised that this sort of movie was just not fun anymore - at least not for me anyway. I had a flash of inspiration and decided to take a new tack. Instead of portraying futures in which everything is horrible, how about stretching my imagination a bit further, taking a flight of fancy and portraying futures in which things are not all that bad? Unlikely as that weird kind of future seems, I thought perhaps I could make it work."

A surge of creativity took him into the making of films with a radically new emphasis and ultimately to a revolutionary new genre: what he refers to as the "topian future" in which everything is all right.

The first of these was Measles Apocalypse (2019). It depicts a near future in which a measles epidemic strikes the planet and millions of people are a bit ill for several days before they get better.

The second was Glare (also 2019) in which relations between the great superpowers, Russia and Iceland, break down to such a degree that they end up glaring at one another and are taken to the very brink of shouting before the nice Syrian government intervenes and they make friends.

The third, which really defines and establishes the new genre, is already in the making. Entitled, "The Man Who Lost His Sandwich", it depicts a future in which things are quite nice. Psychiatry has been abolished, which has brought mental illness to an end. There is no income tax, people are banned from Facebook for posting pictures of not very nice cats, governments have stopped mucking people about and the human race is doing all right - except that millions of people are a bit bored, having been deprived of things to worry about.

Set in this mind-bogglingly surreal cultural background is the story of John Bland who, as the title suggests, loses his cheese sandwich and becomes quite annoyed about it. He had only just made it for his lunch, put it down on the table, turned his back for a moment and it mysteriously vanished. It is the sort of trauma that millions of people can identity with. The movie traces his adventures as he searches high and low for his lost sandwich and becomes quite peckish. Ultimately he finds it again. We are not giving anything away here; the real mystery revolves around what had happened to it and to find out you will have to watch the movie when it is released in December 2020.

Steven Spielberg, for instance, is making "The Alien Planet Where Nothing Much Happened", whilst Clint Eastwood is currently filming "Forgiven", having just finished "Let's All Cheer Up a Bit".