Shock news from the world of politics 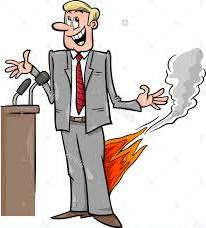 Pants continue to blaze with no sign of respite across the political spectrum this morning as the world of politics was rocked by a shocking development.

Fear and dismay have escalated as things look set to continue the way they have been continuing for hundreds of years and well into the foreseeable future. But things are worse than and, indeed, the same as most pundits dared hope.
This stunning continuation of the status quo has prompted a political storm as elected criminals bluntly accused  other elected criminals. of being crooks.

Liars accused their opponents of telling fibs in a controversial move designed to help various needy vested interests expose vested interests. They demanded that the full force of the law should be brought to bear on everybody else.

Experts are hoping for a return to traditional values in which the full force of democracy is used to blow people up and imprison without trial people guilty of being bystanders or loitering with intent to live in places earmarked for demolition.

Promises made by con men have, we can controversially and shockingly reveal, been broken, much to everyone's surprise and this has provoked their opponents into chastising them publicly before making counter-promises they also have no intention of keeping.

Large rallies of victims continue to be harangued with animated insincerity, causing stuffed shirts with no credibility or charisma to be voted into offices from which to  tend to the needs of their blackmailers and other political allies.

False statistics were produced to show how other statistics were false; meaningless pie charts were thrown; false data was cherry-picked to verify preconceived unworkable ideas; fingers were wagged; various gravy trains were derailed and replaced by new, state-of-the-art high-speed gravy trains that will run on time; hands were wrung and faces spattered with egg.

Fake news items were cited to prove how other news items were fake. Conclusions were jumped to in the traditional way and unverified data was used to verify them, thus making everybody right and everybody else wrong for being stupid.

There was a broad agreement that the environment is dangerous due to the existence of a number of threats that everyone should worry about. However there was equally broad controversy surrounding the issue of what the threats are exactly and whose fault they are. Yet there was broad consensus that whilst dire consequences are vague yet immediate, blame is very specific but elsewhere and preferably very far away.

These developments, which only appeared as recently as 10,000 BC, have left ashen-faced with shock millions of optimists who had hoped that things might change for no apparent reason and factions with a long tradition of acting like treacherous scumbags would spontaneously see the light and become all right and not at all treacherous.

Their disappointment and disillusionment was so profound that they became quite cynical about the whole thing, yet miraculously still believed everything they were told when the next liar came along.

Millions of people nevertheless continue to believe that if they vote for people they couldn't trust to make them a sandwich everything will be all right and their country will be great without them having to do anything except vote.

Related news: the hunt for the exact meaning of "all right" and "great" continues.

Other News: Storm messes up woman's hair.  Emergency hairdressers are on stand-by and the authorities have appealed for calm as storm Rasputin rages across . . .  (see page 666)