Guidelines are laws unless merely suggestions, in which case they are compulsory

except in most circumstances, says Government

The government today issued its latest guidelines for curbing the spread of Coronavirus and other media-borne infections.

In a televised briefing, the Prime Minister informed the nation that we probably won't all die so long as we do what the government says without asking stupid questions (such as, "what's the point?" , "is it really a good idea to shove the nation deeper into bankruptcy? and "are you serious?" etc).

Doing what the government says now includes, thanks to the latest scientific discoveries, new measures that are guaranteed to work as they are based on science and the best and most scientific advice from scientists and certain to scientifically avoid ninety million deaths in the UK alone.

When asked by this reporter "What science is that then, exactly?" the PM's key adviser, Jane Fibbs spoke on the PM's behalf, and told the nation,


In all candor and to be scrupulously honest and factual, I'm happy to report that we can't tell you that, on account of it being a secret for security reasons.

When challenged with, "You're freakin' well making this shit up as you go along!" Ms Fibbs was able to counter that assertion with an irrefutable argument, which we are able to quote in full here:

Having thus put all doubts and misgivings to sleep, the government issued pictures of its latest, scientifically approved protective full-head mask, with instructions on how it can be correctly (above)
and incorrectly (below) worn.

The new head protections must be worn by all citizens except police officers and paparazzi who are known to be, by an amazing stroke of luck, completely immune.

This is a legal requirement although the government was quick to clarify that by "legal" is meant "just a suggestion" in the same manner as the speed limit, although you can be arrested for violating the guidelines, banged up overnight, then released without charge as the compulsory nature of the voluntary guidelines have no basis in law. 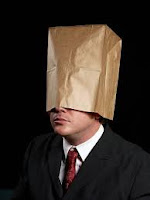 New survey discovers that nobody in the UK knows what the word "science" means.