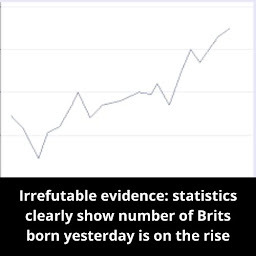 News is just coming in that a survey of politicians, government ministers and civil servants has revealed that the vast majority of those working in government believe that more than most Brits were born yesterday and those who weren't are mentally ill or at least can be considered as such.
This belief is not as fanciful as it first appears because the government's Ministry of Whoppers has produced statistics that clearly show in an unbiased and not at all fiddled way that the birth certificates of over three hundred million Britons  show under the date of birth entry, the term "yesterday".
This, it is now believed, explains the conviction widely held in the corridors of power that the public can be told anything, no matter how stupid and people will believe it if it is done with a straight face.
Recent claims as to the existence of an epidemic that would have brought the country to its knees had not the government acted swiftly to bring the country to its knees is a case in point. 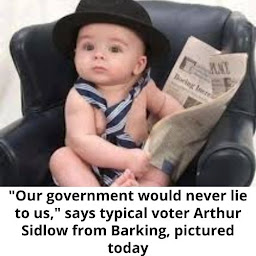 These claims immediately prompted the birth of a Facebook group, "We weren't born yesterday you twats" that accumulated 900,000 members in the ten minutes between its launch and subsequent shut down by FB's Independent Thought Police.
Meanwhile, a video purporting to show several people being born throughout the past thirty years was deleted by You Tube on the grounds that several of the people shown being born were clearly babies and if they had been born years ago they would look a lot older than that.

Everybody will be incredibly rich by 2030 - and not just the rich! - pledges government, which says that top secret scientists have found top secret evidence that this can easily be achieved without the country producing anything.
Pigs to become airborne next year says Ministry of Agriculture.