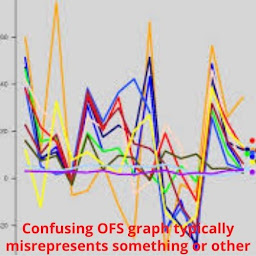 by Steve Cook
Beijing, Thursday
with thanks to Phil Tyler [who is not in Beijing]
Whilst almost every sector - education, manufacturing, health, exports, small businesses, large businesses, huge businesses (except drugs) - is in the doldrums, two at least have cause for celebration.
The first is usury, which is experiencing yet another boom as the economy (except banking) runs out of money (again). [See the full report: The Parasites Are At it Again in our Hoovering Up The Nation's Wealth colour supplement (mainly grey)].
Officials over at the OFS were also celebrating last night after quarterly statistics, published yesterday morning, showed that the output from the OFS had reached an all-time high.
The Office of False Statistics produced a graph showing the number of false statistics issued had soared to a staggering average of twenty four false statistics per UK household, nearly double the output of this time last year.
The figure includes the normal adjustments for insinuations, generalisations, wrong targets, newspaper column-inches of woffle, ridiculous theories and blaming Vladimir Putin which, whilst gratifyingly inimical to rational thought, are not officially considered to be statistics as such.
As one expert, who must remain anonymous for secret reasons, put it:

"If we factor in these other, non-statistical . . . er, factors, then the false statistics statistic would be out of the roof if they counted as statistics which of course they don't, so it isn't."

The record-breaking surge has been put down to the opportunities and indeed imperatives presented by the Coronavirus Pandemic, which is now known to have come about as the result of a sporting bazillion-dollar wager  between Dennis Toshchild and fellow psychanthropist Chuck Rockecenter as to whether humanity could be destroyed by fibbing.
The fibbing, as people with a brain are by now well aware (as opposed to those without one who aren't) involved the deployment of massive stockpiles of made-up statistics and injecting them directly into the brains of millions of human livestock so as to immunise them against rational thought and other impediments to global dominion.
Thus, for months the OFS has been in overdrive churning out payloads of false stats, surpassing even those concerning employment or crime. It was an operation that might have proven beyond even its copious resources had not Professor Neale Fergettem chipped in with his own mathematically  considerable reserves.
Dennis Toshchild - who stands to win his wager if twenty million Brits are voluntarily microchipped by Christmas in the belief that they will never ever die until they are good and ready (which will be, like, never) - said today of OFS' Minister, Joe Fibbs,

"I congratulate Mr Fibbs for the heroic efforts of the OFS in this time of crisis when a shortage of false statistics threatened the very future of the world as we know it. In honour of his contribution I am pleased to award him a room (with ensuite bathroom) in my luxury fallout complex under the Mojave desert where he and his wife will be able to see out the apocalypse in comfort. I am also pleased to confirm that Mr Fibbs has no connection to Jeffrey Epstein and the videos in my possession are purely circumstantial."