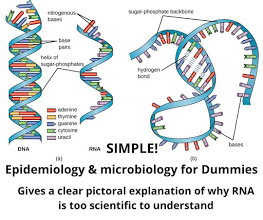 Estación de pingüinos, Antarctica 16/8/20
The current controversy over the unreliability and indeed invalidity of the test for the COVID 19 virus
- what some experts are referring to as the MBGB factor (More Bewildering Government Bollocks) - has brought to light the fact that nobody knows what RNA means.
Millions of people are familiar with the term "DNA" (they don't really know what that means either - although some believe it stands for Do Not Ask or Definition Not Available) but the current pandemic and dedicated efforts by government to pretend (a) to be dealing with it and (b) that it really exists have brought into view a new term - RNA.

It appears in numerous clear and unambiguous explanations that anyone not sure if the tests are any good or not can look up on the internet and put their mind to sleep.

See? Nothing could be simpler, although it does bring to light another phenomenon:experts are really bad at explaining things so as to make their subject accessible to the riffraff and hoipoloi. By "bad at", of course, is meant "antipathetic to".

Be that as it may, anyone not sure about what RNA means can also simply Google a clear and foolproof explanation, such as:

DNA has four nitrogen bases adenine, thymine, cytosine, and guanine and for RNA instead of thymine, it has uracil. Also, DNA is double-stranded and RNA is single-stranded which is why RNA can leave the nucleus and DNA can't. Another thing is that DNA is missing an oxygen. . .etc etc

The famed book "Epidemiology and Microbiology for Dummies" has chipped in with some valuable help using pictorial explanations (see pic) that clearly show how RNA is too scientific fir dummies to understand so there are no excuses for the ignorant masses not returning to their carefully installed hypnotic trance once the word "RNA" is uttered.

For that reason, the government and its remote operators on Venus have issued clear instructions to the FCA (the Fact Checking Mafia of the global educational charity HERD (Help Everyone stay Really Dim) to remove all dangerously comprehensible definitions of RNA from the internet.

Meanwhile, a survey has revealed that the public have varying ideas as to what RNA stands for. Out of 10,000 people surveyed, the answers came back as follows: