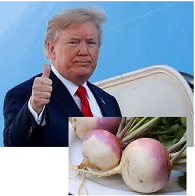 
The IFFR is owned by John "Turnip" Townsend, the renowned owner of the largest turnip farm in Europe, but Mr Townsend was quick to quash any suggestions of a conflict of interests:

"I hereby quash any suggestions of a conflict of interests" he said, adding that research into the Turnip's multitudinous health benefits was completely unbiased and that he was "just as surprised as everybody else" by the shock findings.

Among the turnip's many benefits, conclusively proven by an article in The Guardian, are:

It completely cures cancer in those who consume more than a mere 5 kilos a day.

It suppresses appetite, which is a great boon for dieters everywhere.

A single turnip contains more protein than the average badger.

It contains high levels of every vitamin known to man and quite a few that have not been discovered yet such as Vitamin U and Vitamin X.

Of 10000 Alzheimer's sufferers surveyed not one had the turnip as the mainstay of their diet, thus proving the link between Alzheimer's and turnip deficiency.

Turnip deficiency has been similarly linked to a number of popular diseases you may have seen advertised in the media.

This is so much the case that turnip deficiency is now considered the "missing link" in human health, costing the health services billions a day. As one expert put it: "since the turnip fell out of use in 1792 everyone has been a bit under the weather."

The discovery of America and the arrival on the world's dinner plates of the potato pushed the turnip into a sort of culinary twilight zone in which one would be occasionally included in a recipe for stew for no known reason.

The potato is famous for having been named after a Native American princess (Princess Spud of the Ojibwas) but its popularity, based on the technical fact that it tastes a lot better, brought about a catastrophic cultural shift that denied the world the turnip's many benefits for several hundred years, which is another thing to be annoyed with the Americans about.

But in the wake of these shock developments, the turnip is destined to make a comeback, with the Turnips R Us restaurant chain in the UK working flat out to develop wholesome turnip recipes and a multitude of beneficial turnip-based products, all available on prescription, which include:

In the US, the new president is preparing to endorse the turnip as the vegetable that will Make America Great Again. He will sign into being new laws to make the ownership of at least one turnip by every household compulsory in the national interest.

The Food Giant and self styled "Enemy of the Food Chain", Monsanto, is now preparing a range of genetically modified glyphosate-rich turnips, altering their DNA so that they resemble amusing parts of the human anatomy, a move that Monsanto is confident will greatly boost sales.

Russia meanwhile, in another paroxysm of its legendary and, indeed, fictional aggression is preparing a response that it hopes will bring the Western turnip industry to its knees.

Sources claim that Vladimir Putin is preparing to flood the West with beetroots, a move supported by bogus scientific discoveries released by the infamous Russia Today that claim the notorious "Red" (ie Communist) vegetable is rich in B vitamins.

Is calling a drug a Class A drug a guarantee of best quality?

More versatile than hemp? Researchers predict the car of the future may be made from turnip.