Cycling Helmet Embarrassment Syndrome Soon to be Thing of the Past, Experts Claim. 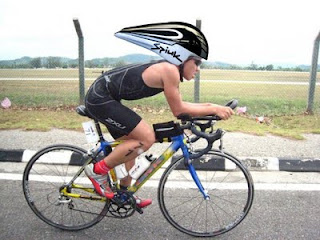 by Steve Cook
Researchers have discovered the primary factor preventing millions of the nation's men from leaving their cars in the garage and taking up the healthier alternative of cycling instead.

By survey, the anxiety that causes men to reject cycling is not, as had been previously believed, the exertion required, the fear of a heart attack or the fact that cycling takes you ages to get anywhere, but what experts are calling CHES, Cycling Helmet Embarrassment Syndrome.

Nine out of ten men between the ages of 26 and 72 gave as their main reason for not cycling the fact that the standard cycle helmet is way too nerdy, undignified and inclined to make the wearer look mental. 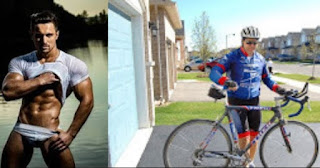 A case in point is Dave Gritt from Leamington Spa who lost his machismo entirely after donning the traditional cycling helmet for a short trip to Tesco to buy Brylcream. You can see him here before (left) and after (right) donning the infamous helmet.
A British company, however, has come up with a solution that may enable millions of men to keep their dignity and cycle at the same time.

An ingeniously simple solution was introduced this week by the helmet manufacturer Protekta Head of Braintree, who have released a new range of macho cycle helmets designed to make men not look at all stupid.


Examples of the new designs can be seen in the pictures below. The horned "Viking" in particular is confidently expected to become a best seller judging by the flood of advance orders Protekta have already received.

A spokesperson for Protekta told this reporter that the company hopes its new helmets will change the image of cycling forever and foster a boom in bicycle sales with millions of men taking to the nation's cycleways confident that they will still look hard.