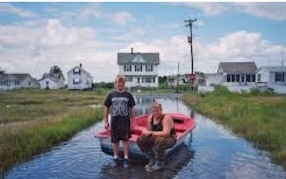 Sea levels have been rising at a rate that may well trigger an ELE (Extinction Level Event) for the Global Warming Industry and send tidal waves of despair throughout many worthy humanitarian causes such as HALO (Help the Aged Loony Oligarch) and MOFASTO (Merchants of Fear and Similar Terrorist Organisations). The disappearance of so many familiar anagrams may well, however, provide some consolation for societies such as SEA (Society for the Elimination of Anagrams).

Ever since scientists noticed that ice sometimes melts and the climate is sometimes warmer than at other times, we have been threatened that the ice caps are going to melt any day now and sea levels will rise, drowning everybody except people who live on luxury yachts or the top of Mount Everest and similar seaside resorts.

Sure enough, sea levels have risen in just thirty years by just short of half a millimetre, although many believe that this is just scaremongering and the actual figure is probably zero. As proof they cite a chalk mark left on the sea wall at Dover by a holidaymaker at high tide in 1961 and which is still there to this day.

The ice caps, however, continue to melt at an alarming rates whilst remaining exactly the same size, a  scientific phenomenon known as the Anomolous Melting of Ice Caps.

The melting of the ice at the North Pole is not thought to be too much of as problem as there is no land mass there. The ice is already in the water and as it takes up less volume as it melts (or not), it could well cause sea levels to fall.

The southern Pole, however is a whole different kettle of fish (who by the way are generally quite grateful for the extra water). This is because it is a land mass and there is a whole load of ice on it that, when it eventually melts at any time between tomorrow and AD 20,000, will rush into the sea. This will cause the aforementioned rise in sea levels that will give everyone reason to buy more antidepressants and put complete faith in their government's ability not to cock things up eventually.

Yet the sea levels haven't budged. This could be explained by the argument that the ice caps are not actually melting. This however seems unlikely mainly because a whole lot of newspapers are telling us they are, a fact scientifically backed up by memes on Facebook.

So the question has been raised and annoying scientists for over thirty years: as the ice caps melt and water to the tune of bazillions of gallons rushes into the oceans carrying with it dead polar bears and homeless penguins, where is all the extra water going?

This problem has now been solved beyond reasonable thought. Scientists have discovered that there are billions more people living on the planet than there were twenty years ago (a new problem there for the Planetary Immigration authorities, we think) and all these extra people are drinking all the excess water.