Shock News from the World of Rugby Union 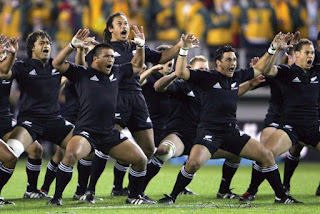 
News just in is that the England Rugby team have announced that they will be introducing their own version of the famous “Haka” (pictured right) performed by the New Zealand Rugby players before matches.

The move is widely predicted to spread “fear and dismay” throughout the word of Rugby, especially in England.


The Haka is a Maori dance, which starts with the chant "Ka mate, ka mate (It is death, it is death”). It is both a war chant and a challenge and is customarily performed by the All Blacks before major games.

It is characterised by loud chanting, aggressive flailing of arms and stamping of feet, fierce looks and angry tongue poking. Those who have witnessed it will vouch for the fact that it is both inspiring, a bit demented and, in fact, quite rude.

It is designed to wilt the resolve of opposing teams by convincing them they are about to engage in sport with a team of homicidal psychopaths.

Not to be outdone, English Rugby Union plan to introduce their own traditional English version, a war dance of great antiquity, which they believe will convince opponents they are about to play people similarly unhinged and put opponents completely off their game.

At a secret training camp, English players have been rigorously trained in the new dance and its simple but profoundly disturbing choreography.

When England play South Africa in the forthcoming Rugby World Cup final later this year, provided the intensive rehearsals to fine-tune the almost surreal choreography have gone well, they plan to unleash it upon their unfortunate opponents and, indeed, the entire world at the pre-match warm-up. It is expected that having to face it for five long minutes will greatly test the resolve of the South African players.

Called the “Morris,” it is confidently expected to completely break the concentration of the South
Africans and to perform it, the English players will be using especially embroidered handkerchiefs for the first time.

Other dances were considered during the planning stage but in the end the Morris was chosen in preference to another traditional English dance known as the “Jive” as the latter occasioned too much risk of injury to the players.