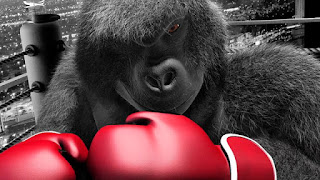 Controversial first-round  knockout for the Salisbury Simian as the world of boxing successfully avoids offending anyone.
by Steve Cook

In an earlier issue we reported the success of researchers at Neasden University who taught Dennis the gorilla an extensive vocabulary of hand signs by which he was, remarkably, able to master an ever-increasing vocabulary of words.


Dennis, who hails originally from Salisbury Zoo in Wiltshire, progressed steadily from there and soon reached the point where he could hold a conversation with almost anyone, harangue political canvassers, win pub quizzes, falsify his tax returns and so on.

This led him inevitably to identify as a human, adopt the surname Rogers and take up boxing professionally.

The rest, as you are no doubt aware, is history. An unbroken string of 347 first-round victories in the heavyweight division (344 knockouts, 2 dismemberments and one opponent who ran away) brought Dennis inevitably to last night's World Heavyweight Championship fight against reigning champion Vladimir Orlov "The Ogre from Omsk".

Orlov fought bravely for twenty-nine seconds, and in so doing lasted three seconds longer than any of Dennis ("The Salisbury Simian") Rogers' other opponents, before the latter's raw power and 300 pound weight advantage took its toll.

Thus, Dennis Rogers became the first former gorilla to lift the World Heavyweight Crown and the first Briton to hold the title since  Tyson Fury.

At the post-match press conference, Dennis' brother Andy, who has been his trainer and manager 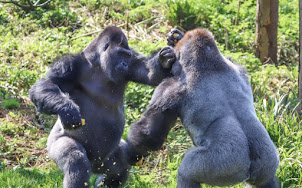 since Dennis' trans-species re-assignment and can be seen here sparring with him at their private gym in Sidcup, responded to questions about Dennis' remarkable rise to the boxing heights:

Speaking through Dennis who acted as his interpreter, Andy said,

"I think it was inevitable that Dennis was going to become World Champion. I recognised his potential early on. While he may be a trifle short on technical ability, he has all the natural gifts of strength, power and size that render technical factors, such as an ability to box, of secondary importance."

The outgoing Champion, Vladimir Orlov was magnanimous in defeat. We interviewed him as he recovers from a broken spine at London's St Thomas' hospital and asked him about the controversy surrounding Dennis' trans-species re-identification. Did he think that the natural physical endowments of his former species gave him an unfair advantage?

To this, Orlov replied:

"If there is one thing I have learned from boxing, it is that it is important not to offend anyone or hurt their feelings. So if Dennis chooses to identify as a human, who am I to question it? The most important consideration in my opinion is not preventing the destruction of competitive sport through the insertion of daft ideas by complete loons but avoiding at all costs hurting Dennis' feelings. If I have managed to help support Dennis' right to be a human in defiance of all the biological and physiological evidence to the contrary, then I think spending the rest of my life in a wheelchair is a price well worth paying."