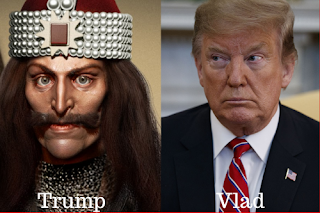 The impeachment proceedings against US President Trump took a new and sinister turn yesterday with the discovery that he probably has links to a Russian psychopath.


The US President is under fire from politicians on both sides of the House who share common ground in their spotless consciences, loyalty to corporate interests, lack of any ties whatsoever to Geoffrey Epstein and their love of globalism. They accuse him of having committed a string of unforgivable crimes that render him unfit to hold the ninth-highest office in the land:
His collusion with Russia is already well known, as is the way in which Russia was able to magically influence the election without having any control of the media or any of the social networks.

"The influence of Russia," warns Joshua Cohen, a spokesperson for the Department of Red Herrings,"over every aspect of political life is considered by many to be a threat to democracy as well as evidence that Vladimir Putin possesses supernatural powers."

When this reporter asked whether Trump's direct familial and other ties to Zionism ought to be of greater concern, I was told by Mr Cohen in no uncertain terms.

"That's just the sort of specious argument a Russian collaborator would make. Zionist influence over the media, banking, the elections, the funding of both political parties, the legislature, domestic and foreign policy and so forth could, if you want to split hairs, be considered by ordinary people and other troublemakers to amount to quite a lot of foreign influence. Yet it is nothing anybody need worry about. It is traditional in any case and whilst foreign interference is bad, the exception is obviously Israel, which nobody has ever minded interfering. Besides, Israel is not as foreign as Russia."

Meanwhile, new and damning evidence has emerged from the ongoing investigation into Trump, known as Operation Straw-Clutch, which was instigated by concerned Democrats determined to save America from not electing Hillary Clinton or a similar, really awful candidate for a second time.

It focused first on Trump's links to Hitler, who it emerged was provided the finance for his war machine by the very same New York based banking interests that loaned Trump a million dollars to build a golf course in Scotland (which is quite near Russia) in 1983.

But then it emerged as the operation dug deeper in its selfless determination to unearth the truth, that Trump has links to the now-deceased very |Russian-like maniac Vlad the Impaler who is famous for having been just like Dracula. Vlad was ruler of Romania, which has links to Russia, and is thus very similar to Vlad Putin.

The link was well hidden but the investigators have done us all a great service by at last shining the horrible light of truth upon it. Evidently, what Trump failed to tell anybody was that his mother's cousin twice removed was married to a direct descent of Vlad the Impaler.

"If the electorate had known about this in 2016 it is almost certain that Trump would not have gotten elected. In other words, millions of Americans were duped and this newly discovered link to Russia constitutes the best reason yet to impeach the President." said Mr Cohen.

Trump linked to space aliens? His failure to disprove the claims almost certainly proves they are probably true.