Bill Gates is not trying to kill you and you can trust us on this, says media 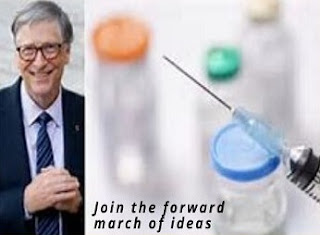 by Steve Cook
Various newspapers and magazines the world over have today leapt to the defence of much-maligned but extremely rich philanthropist Bill Gates over his philanthropic plans to reduce the population using vaccines and 5G radiation.
Particularly controversial is his completely innocent and not at all sinister scheme to use vaccines to implant people with microchips so that undertakers can easily find their corpses using Google Maps.

Gates (motto: Vaccines or Death, Preferably Both”),whose financial investment in vaccines yesterday reached two and a half bazillion dollars, explained that his investment in vaccines is purely philanthropic and has very little to do with making lots of money, nor with making people sick, even though this expands the markets for vaccines.
He explained that scientists at the famous BIll and Vampira Gates laboratories in MorCullin have discovered that injecting people with toxic materials such as aluminium, mercury and antifreeze makes people far less likely to catch a virus before they die.
He further explained philanthropically that researchers at another completely independent laboratory, the Gates Institute in Australia, have also discovered that the optimum number of vaccines for the average human being is 143, although there have been problems inventing illnesses to go with the vaccines.
When it was put to him by this reporter that over-vaccination might actually destroy the immune system, Gates retorted that human beings hardly need anything as antiquated as an immune system when there are thousands of vaccines they could be injected with that could do the same job more expensively, albeit with side effects that can easily be handled with a couple of hundred routine pharmaceutical medications.
Gates has also been criticized by concerned citizens and other conspiracy theorists over his support for 5G on account of the fact that it causes strange lumps to appear in children and the early onset of dementia in teenagers.
His response to that accusation has been swift and telling. He is on record as silencing his critics by saying, “Oh no it doesn’t and, besides, you can trust me, I’m a philanthropist.”
His philanthropic credentials are hard to argue with. Why only last week he donated half a gazillion dollars to the cause of helpfully rolling out 5G across a planet sorely in need of its benign microwaves and cognitive impairment.
One of the advantages of 5G, he explained, is that it impairs the human immune system, which has evolved over millions of years into being completely rubbish. It thus paves the way for vaccines whilst providing funds for Help an Aged Oligarch and other philanthropic causes..
Reputable and completely unbiased sections of the media have leapt to Gates’ defence:
The New Philanthropist, a  philanthropic magazine funded by a well-known philanthropist, told its readers (Sid and Agnes Loon of Dunthinkin) that Gates’ investment in 5G is a boon to mankind in that it will usher in world peace by making everyone too tired to argue.
The New Gatesian dismissed concerns that two common ingredients of vaccines, mercury and aluminium, are highly toxic as “fake news circulated by scientists, doctors and other conspiracy theorists.”
Bill Gates Monthly chimed in with, “The scurrilous attacks on Gates, a man with an impeccable record of never having killed anyone directly, are merely a conspiracy on the part of millions of conspiracy theorists.”
“Vaccines are totally brilliant and so is 5G and this has been thoroughly proven beyond reasonable thought,” said The Gatesetarian, “This tendency of people to selfishly question things or equally selfishly try to stay alive on an overpopulated planet is Communism pure and simple. We’re sure Gates would agree with us were he here to ask – which he isn’t at. all.”